Even though she decided to move away at a young age, Carolina Miranda maintains connection to Brazilian roots

When Carolina Miranda was about eight or nine, she announced that one day she would move to a country more than 9,000 kilometres from her Brazilian homeland – Canada.

“I just remember a growing feeling. My parents always bought us magazines like National Geographic, so I think I must have seen something, ” recalls Miranda.

“Rio is very similar in landscape to Vancouver, with its big, high mountains by the water. I remember quite clearly the exotic (Canadian) landscape and the wilderness are what attracted me.”

She and her brother had a typical Brazilian childhood. Their mother was a homemaker and their father was an economist and businessperson. Their neighbourhood in Rio de Janeiro’s outskirts had unpaved streets and a night sky bright with galaxies and stars. They later moved to Jundiaí (near São Paulo), a community similar in size and feel to Kitchener and Waterloo.

“Food in my family has always been sacred. We don’t buy things in boxes; the women make it. It’s how we come together: where we learn to love is around the table with our grandmas.

“In Brazil, culture and family histories are passed on from older generations of women to the younger ones, often at the table or in the kitchen.”

While growing up eating and learning to make dishes that were important to her Portuguese maternal grandmother, she learned very little about her maternal grandfather’s story.

A few years ago, Miranda started to piece together his story when she realized his mother (her great-grandmother) was likely a member of a Tupi-speaking nation from Brazil’s northeast. She was part of generations of Indigenous people who were converted to Roman Catholicism and renamed. Her son, being of mixed race, faced the racism and suffered the stigma of being a brown person in São Paulo in the 1940s and 1950s. Since neither of them shared their experiences, and there are few official documents, their stories may not be fully recovered.

“Salvador’s very dark, very painful history is connected to Brazil’s slave trade. Now it’s one of Brazil’s strongest cultural capitals because there’s such a mix of flavours and people and colour. Because colonization began more than 500 years ago, those (distinct) threads are not so clear anymore. Many people have mixed, and some have forgotten their roots, like I did.”

Miranda credits cooking one of her grandmother’s dishes, Moqueca (see recipe), with grounding her when her marriage ended.

While making this fish stew with her parents, she realized that while she may not be in Brazil, she could find things that tasted and felt similar to home.

“You share food with the people you love, you share it to show appreciation. I find it’s how much love you put into it, is when food becomes a thing.”

Miranda had her first taste of Canada at 16, as an exchange student in Caledonia in the mid-1990s. While she learned as much as possible about her temporary home, she was unprepared for the social realities witnessed during the Caledonia Crisis.

“I was a kid and just arriving; it was so obvious to me, ” she remembers. “At the time I didn’t know my great-grandma was Native (in Brazil). I gravitated to the Indigenous community here, but I didn’t know why. I knew they were struggling, but I couldn’t consciously put it together then. I put it together about four years ago, but when I look back to 1996, it was all intuitive.”

She returned to Brazil wiser but also smitten with Canada. She visited again and immigrated after graduating from university. Marriage followed and she and her then-husband lived in several communities in southwestern Ontario, before settling in Waterloo Region. Connecting with other new Canadians and immigrants – including theatre work with MT Space in Kitchener – helped her find a place in her new community.

After her marriage ended, the mother of two realized she didn’t have access to the female-focused support systems she studied while working on her master’s in education. These readings highlighted how women thrive when they seek out and create networks and circles, ideas that form the basis of Feminine Harbor, which she launched three years ago. This social profit builds women’s social power through shared experiences and storytelling.

“If you think of the world, immigration and diaspora cause women to sever those circles of love and shared traditional stories. Feminine Harbor is a way of creating those circles and tapping into power, too, just by bringing together the family or friends in the community in an organized and celebratory way.”

Its storytelling platform, LIGHT Stories (an acronym for Love, Intelligence, Guidance, Humanity and Trust), is structured similarly to The Moth and TEDx, but centres on the power of women’s experiences. Events take place every three months at the Kitchener-Waterloo Art Gallery and feature four women from diverse communities, ranging in age from their 20s to seniors, each speaking on the evening’s theme. The events attract a broad audience, some of whom relate the paradigms back to their own stories and cultures.

“A man from Zimbabwe came to the one in December and he was deeply moved. He said this is something that feels like home and he never thought he’d see it here.” 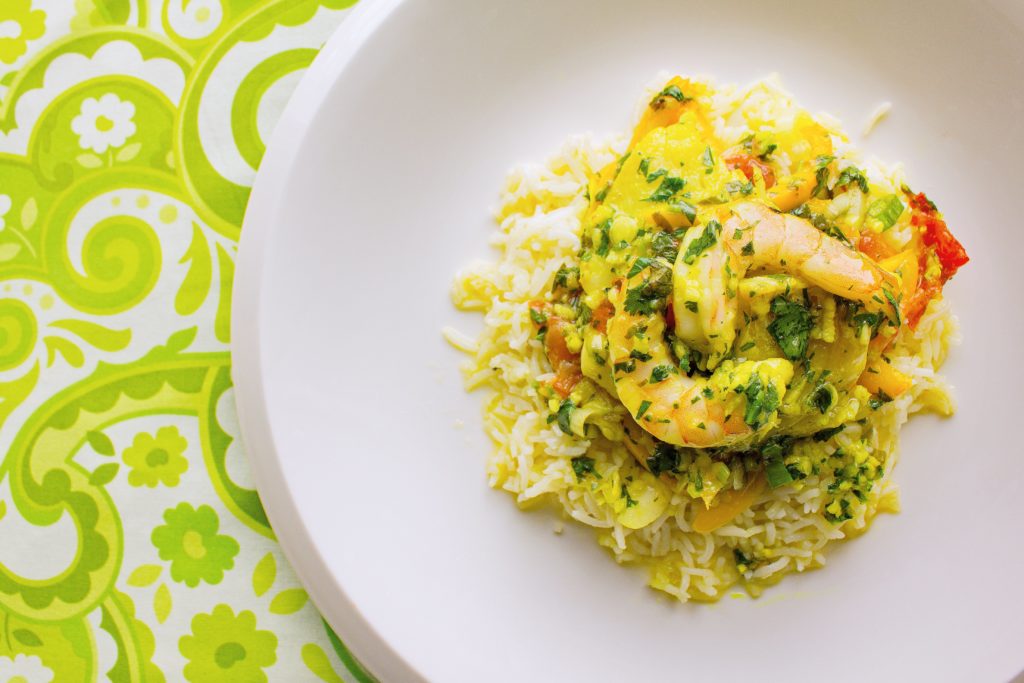 Moqueca is a fish stew, developed during slavery in Brazil. Made from ingredients the cook would have on hand, the dish is named for the earthenware pot used to prepare it.

As azeite de dendê (red palm oil) can be difficult to find, turmeric is used to create a warm yellow hue.

This dish is great for those who’ve never cooked fresh seafood before. Just remember: To avoid overcooking the shrimp, you’ll need to remove them from the marinade before cooking the rest. Return the shrimp to the stew for the last few minutes of cooking.

Serves: 6 (Recipe can be halved)

Place the fish, shrimp, tomatoes, bell peppers and onions in an oven-safe dish such as a casserole dish, braiser or lasagna pan. Pour the marinade over the fish and vegetables and turn them so they are well-coated. Marinate for 20 minutes.

Remove the shrimp and let them rest in the fridge. Place a lid on the dish or cover tightly with aluminum foil, and cook in the oven until the peppers are soft, about 25 minutes (see notes).

Once the peppers are soft, add the shrimp on top of the stew, re-cover and cook for another 5 minutes or until the shrimp is cooked. Serve over rice.

In a heavy-bottomed saucepan, sauté the onion in olive oil over medium heat until translucent, about 5 minutes. Stir in the garlic and cook until it releases its aroma.

Mix in the rice, pour in the water and add the salt. Keeping the heat on medium, boil uncovered until the water has evaporated/been absorbed, the rice’s surface appears dry, and some steam vents appear. This will take about 8 to 10 minutes.

Lightly mix the rice with a fork, cover the pot, and turn down the heat to low. Cover the pot and let rice steam for 10 minutes.

Remove the pan from the heat and let stand, covered, for 5 minutes.

Fluff the rice with a fork before serving.

This feature appeared in the May-June edition of Grand magazine.