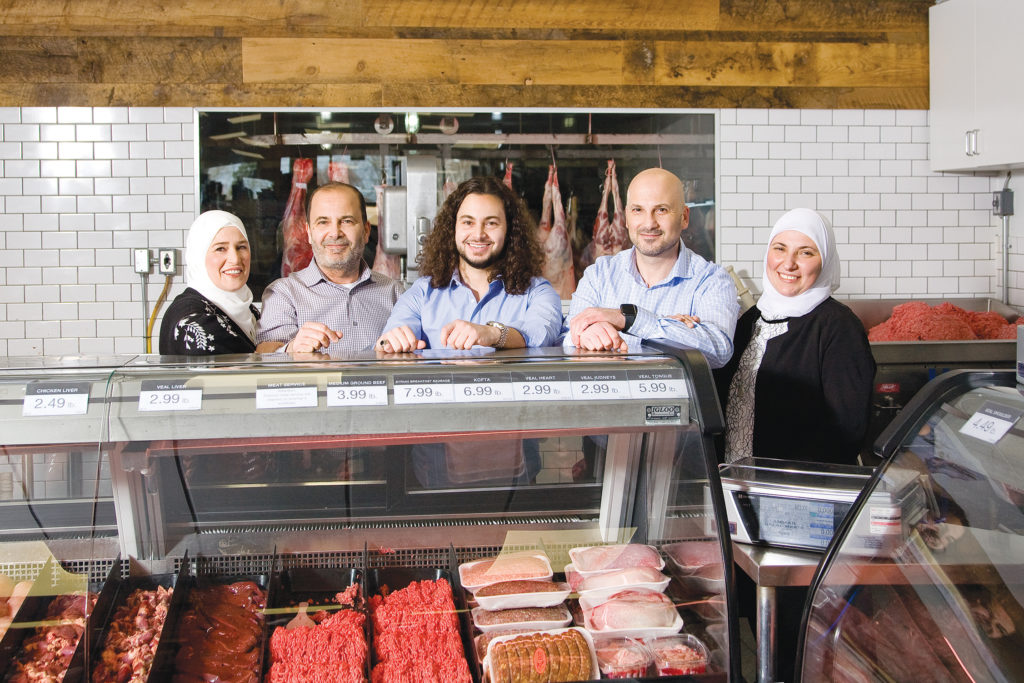 Bashar Al-hendi remembers Damascus in the 1990s as having a vibrant and modern downtown, universities where there was a mixture of social classes, and a feeling of inclusiveness.Yet he and his brother, Ammar, were 20-year-olds brimming with dreams and ideas, focused on fresh starts and exploring opportunities away from the Syrian capital.

With family already in Toronto – relatives started immigrating in the 1980s – Canada was already in the Al-hendis’ imagination. When émigré family members returned for visits, they talked about their lives, the people, the culture and the possibilities in their new country. For Ammar, who studied computer science, and Bashar, who was in law school, their future would take place a quarter of the world away.

Ammar immigrated to Toronto before his elder brother. Working at a small supermarket owned by relatives, he learned the butchering trade as well as general shopkeeping duties. He moved on to other stores, all the while building his skills and broadening his cooking knowledge by learning how different cultures cook and prefer to have meat cut and trimmed.

For a while, Bashar divided his time between Canada and Syria, working a few months here to earn enough to support his young family back home. When they were able, his wife, Raghdaa, and two-year-old son, Faaez, joined him in Toronto.

Uprooting a family can be a stressful and lonely undertaking; moving to a country with a different language and culture can be even more so. While Bashar had family here, Raghdaa left behind her large and tight-knit family. Goodbyes were difficult, but her family encouraged this chance to go to the country they’d heard so much about.

“What really helped (my parents) was they had a lot of family already here,” says Faaez, now 25 years old. “The people they were mixing with and were going to places with were people like them and from similar backgrounds. It helped make them feel a little more at home and ease them into Canadian society.”

Ammar’s wife, Ramia, joined him, and they started a family, and Bashar’s family grew. After a few years in Toronto, Waterloo Region’s quieter lifestyle and smaller community attracted them and other relatives. Ammar found work as a butcher while his brother used his savings to partner with cousins to buy a convenience store franchise.

At the time, there weren’t many places locally that offered Middle Eastern groceries or halal meats. Seeing an opportunity that combined Ammar’s butchering skills and Bashar’s business acumen, the convenience store was sold and the brothers opened Ammar Halal Meats in 2004, selling fresh and frozen foods, imported foods, bakery goods and halal meats.

At the shop, it’s common to find customers tapping the white-coated butchers’ skills, knowledge and advice. Apart from getting their meats cut and trimmed in the same way it would be done back home, people look for advice not easily found in books or online.

“You can have a conversation with the butcher. He can tell you how to cook your meat, which cut works best for which dish, how much fat you need in your meat, and how long to cook it,” says Faaez. “Customers will also come in and say a dish didn’t turn out. We’ll find out they forgot to do something and tell them. They’ll return after they remake it and say it was amazing.”

Today, with a family business and three children at home in their teens and 20s — Faaez and his younger siblings, Mohammed and Yasmine — nightly suppers help keep Raghdaa’s and Bashar’s family connected. After he returns from the shop, the family gathers around the table and catches up on each other’s day.

Raghdaa continues her mother’s traditions but has adapted her cooking. She cooks with beef and veal more often than lamb — Canadian breeds taste different than those in Syria. Olive and vegetable oils have replaced ghee and lamb fat.

She often serves stews and braises, but the family can also have mezze — a selection of dips and preserved vegetables — such as tahini-blended dishes of chickpea hummus or moutabal (made with eggplant) or a spiced and oil-cured eggplant dish called makdous. Refreshing and bright salads, such as tabbouleh (recipe follows) and fattoush with torn pita are served.

While the family’s immigration journey began in the 1980s, the Al-hendis remember and are sympathetic to the challenges of moving to a new country. Their shop has become a gathering spot for the area’s Syrian community, where newcomers can ask for advice or help.

“Being able to come here, talk in the same dialect and ask for what they’re looking for and help them is important,” says Faaez. “They’d come and ask us for help with anything, whether it’s paying bills, translating a letter from the government or asking where to find this or that.”

For the past 15 years, customers from an array of backgrounds have entered the shop. While they pick up what they need, they’ll sometimes chat and share advice about food and recipes with one another.

“What I love is seeing people you normally wouldn’t see in a store like ours, looking for ingredients for a dish they tried from their Syrian neighbour,” says Faaez. “We’re a Syrian family, but we interact with customers from all around the world, and that helps us learn and improve. People from different cultures and backgrounds meet, converse, and get each other’s advice. That’s something I really enjoy.” 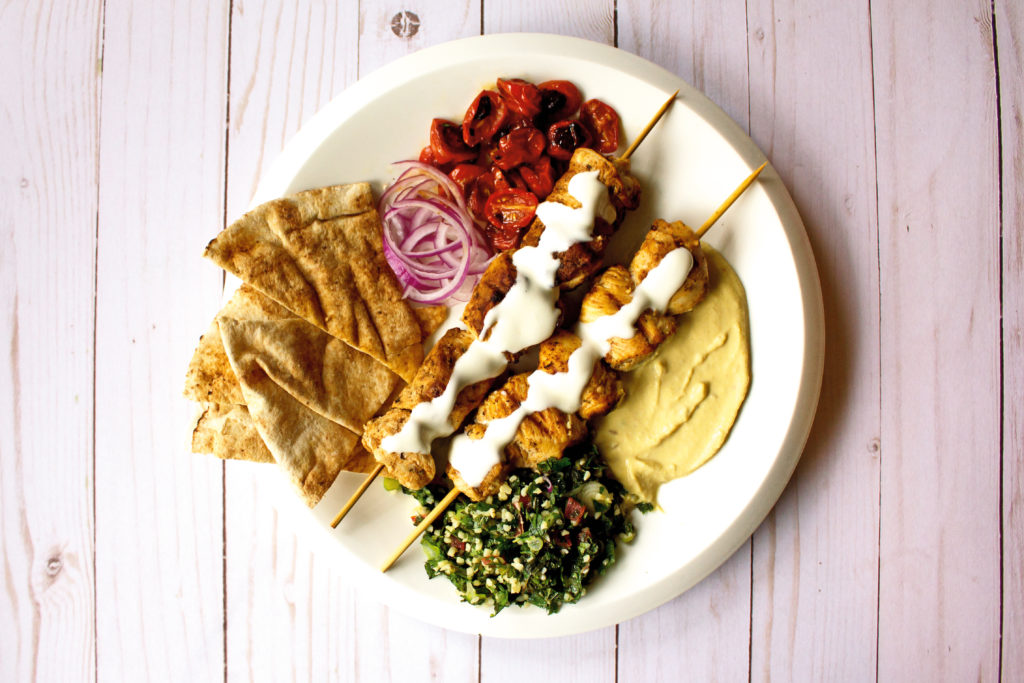 This is an easy and quick meal to cook, but the meat needs time to absorb the marinade’s flavours. Yogurt makes the meat succulent, but leaving the pieces in the marinade for longer than 90 minutes can lead to a woolly texture. For best flavour, grill these kebabs over charcoal, but you can easily cook them on a gas grill or inside on a grill pan or tabletop grill.

4 cloves of garlic, crushed and finely chopped with a pinch of salt (approximately 22 ml / 1½ tablespoons)

Mix marinade ingredients in a non-reactive bowl (such as ceramic, glass or stainless steel) that’s large enough to hold the chicken.

Coat chicken pieces with marinade and refrigerate for at least 1 hour (90 minutes, max).

While the chicken is marinating:

• If you’re using wooden or bamboo skewers, soak them in water for 30 minutes;

When the chicken is ready, skewer the pieces. Discard any marinade that the chicken didn’t absorb. Grill the skewers by turning them every 5 minutes until juices run clear, about 10 to 15 minutes.

When cooked, rest the skewers by placing them in an empty, warmed (but not hot), tightly lidded pot or tent them in tinfoil for about 5 to 10 minutes. This will let the juices reabsorb into the meat and help keep the kebabs moist. 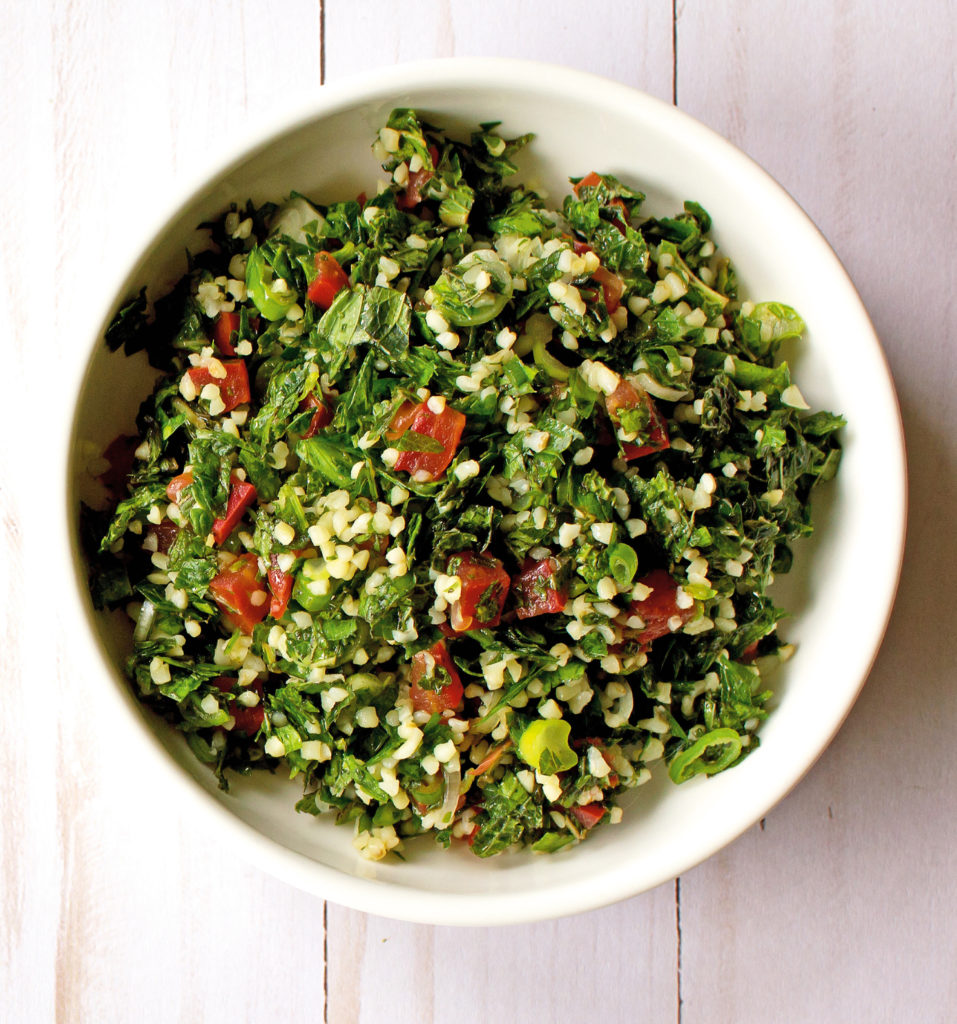 A few tricks help ensure this refreshing herb salad doesn’t get too wet. First, thoroughly dry the leaves after rinsing them. Use a very sharp blade for chopping – a dull blade will crush the leaves and make them mushy. Thoroughly drain the bulgur before adding to the salad – the bulgur will soak up the dressing as well as the juices from the onion and tomato as it sits in the salad.

Rinse the bulgur wheat in a sieve until the water runs clear. Drain well, transfer to a bowl and add boiling water. Cover with plastic wrap (or place a plate over the bowl) and let sit for 30 minutes.

While the bulgur absorbs the water, roughly chop the parsley and mint with a very sharp knife. Place the herbs, green onions and tomato in a bowl.

When the bulgur is ready, thoroughly drain it and add to the herb mix. Pour in the lemon juice and olive oil and mix well. Balance flavours to taste.

You can use fine bulgur wheat, which doesn’t need as long a soak as coarser grades do — about 5 to 10 minutes.

You can serve the dish immediately, but it does benefit from a rest — as short as 30 minutes — which helps the flavours settle.

This article appears in the July-August edition of Grand magazine.