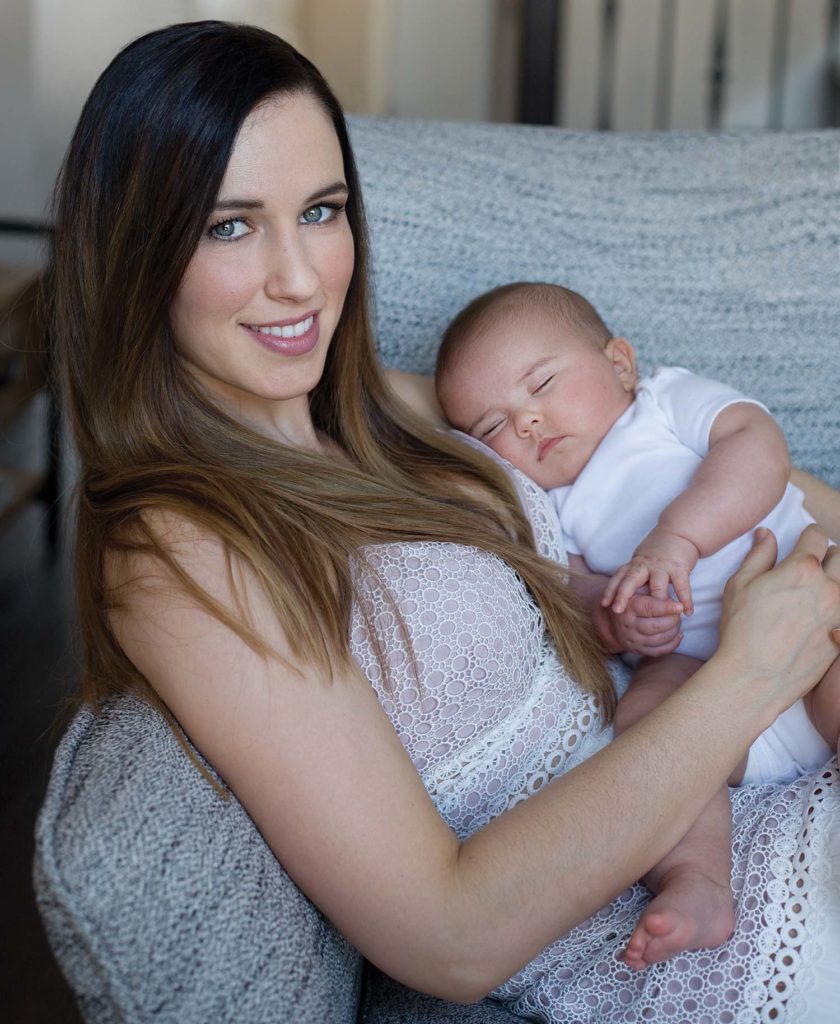 Mandy Bujold and her daughter, Kate, were photographed in their Kitchener home by Alisha Townsend. Bujold is wearing a cream crochet overlay dress by Saylor, $340, available at Uni+Koncept in Waterloo.

The moment I learned I was having a girl I was filled with so much emotion.

I know that as a little girl you will always look to me as a role model and I immediately felt extra pressure to make decisions with this in mind.

I want you to look at my example, especially what I do between now and next summer, and know you can achieve anything you put your mind to through hard work and dedication.

In doing so, I’m also taking care of unfinished business for myself.

The last time I was at the Olympics, in 2016 in Rio de Janeiro, I got sick the night before my quarter-final bout and I wasn’t able to accomplish my goal of winning an Olympic boxing medal.

After years of hard work, I need to try again or I will always regret it.

By the time I plan to step into a ring in Tokyo, I will be turning 33 years old and you will be three months shy of your second birthday.

So, with your dad in my corner, the plan is in motion and we’ll see what happens.

As I made my decision to pursue this Olympic dream one more time, I thought of what I’d tell you if you were in my position. I’d tell you to go for it and I’d support you the way my mom is supporting me.

When you arrived Nov. 5, we didn’t get off to the start I had planned. (And you will grow to realize your mom likes to have a plan.)

As a matter of fact, we both had to be fighters during your first month.

You were born three weeks earlier than expected and spent your first week in the neonatal intensive care unit at Grand River Hospital due to your small size and respiratory issues.

Then, a week after we got you home, I got a bad infection and had to spend a week in the hospital myself.

Even when I got home I still had intravenous for three days, so I had that on one arm and you on the other.

It was a scary time but we got through it and we’re both healthy now.

It took us a few days after you were born to figure out your name.

We considered a few options before deciding on Kate. It’s a classic and it felt right, especially after both of your grandmothers suggested it too.

As for your middle name, Olympia, that was all me.

I had Olympia on a list of first names I liked but your dad wasn’t convinced. Then, one day when we were with you in the neonatal unit, he said I could pick your middle name on my own.

And while it’s a coincidence your initials are K.O., you have to admit it’s a perfect fit with me being a boxer.

Your middle name also gives you something in common with Serena Williams’ daughter. Serena is a great tennis player who returned to top form not long after becoming a mom.

She is an athlete I admire. Her example helps me push myself on the road to Tokyo.

Some people have questioned my training. They feel I should just be at home with you, so seeing other elite athletes returning to form after having babies inspires me.

It wouldn’t be possible for me to train without the support of your dad and grandparents, as well as a few friends who have offered to watch you so I can sneak out for a workout.

You are a great baby and don’t put up much fuss unless you need to be fed.

People at the gym are amazed we can take you there and that loud noises, such as people hitting punching bags and bells ringing, don’t bother you.

I suppose it’s because you were exposed to all of those sounds while in the womb, as I was working out right up until the day before you were born.

Before you arrived I would often work out three times a day to stay in fighting shape but I’ve learned to accomplish what I need in two sessions. It gets a little interesting when you’ve been up three times during the night but adrenaline kicks in. And there are days when it’s a good thing we’ve got that equipment in the basement I can use.

One of the gyms where we’ll be spending time is SydFIT Health Centre in downtown Kitchener. You’ll get to know a man there named Syd Vanderpool, who I have asked to coach me.

I’m looking forward to working with him because we have known each other for years and he’s familiar with my boxing style.

Even with all of this going on I have had what, at times, feels like a full-time job on its own.

I organized a fundraising event in April called Champions for Charity, which was a gala event and night of boxing that featured local businesspeople lacing up the gloves for charity.

We raised well over our goal of $100,000 for the Hamilton Health Sciences Foundation.

In a strange twist, within days of joining forces with that charity, we ended up needing the services of McMaster Children’s Hospital.

An ultrasound 20 weeks into my pregnancy revealed a potential issue with your heart and we needed to see a specialist in Hamilton.

They had us prepared for the possibility you would need open-heart surgery after you were born.

Luckily, none of the feared complications emerged but we had the experience of feeling scared and helpless.

It showed us how blessed we are to have that kind of health-care facility so close to home and reinforced why it was such a good cause to support through Champions for Charity.

Through it all, though, you are my top priority.

I don’t think you’ll fully understand what I’m accomplishing until the day you have children.

I know this because I didn’t appreciate all of my mom’s sacrifices until you came along.

Hopefully you’ll look back and say, “Wow, when I was a newborn my mom organized a successful fundraiser and trained for the Olympics.”

At the very least, I hope to have set an example for you to follow.

And whatever your dreams end up being, your dad and I will always give you the love and support you need to chase them.

Mandy Bujold had Grand editor Brian Williams working in her corner to help produce this article.