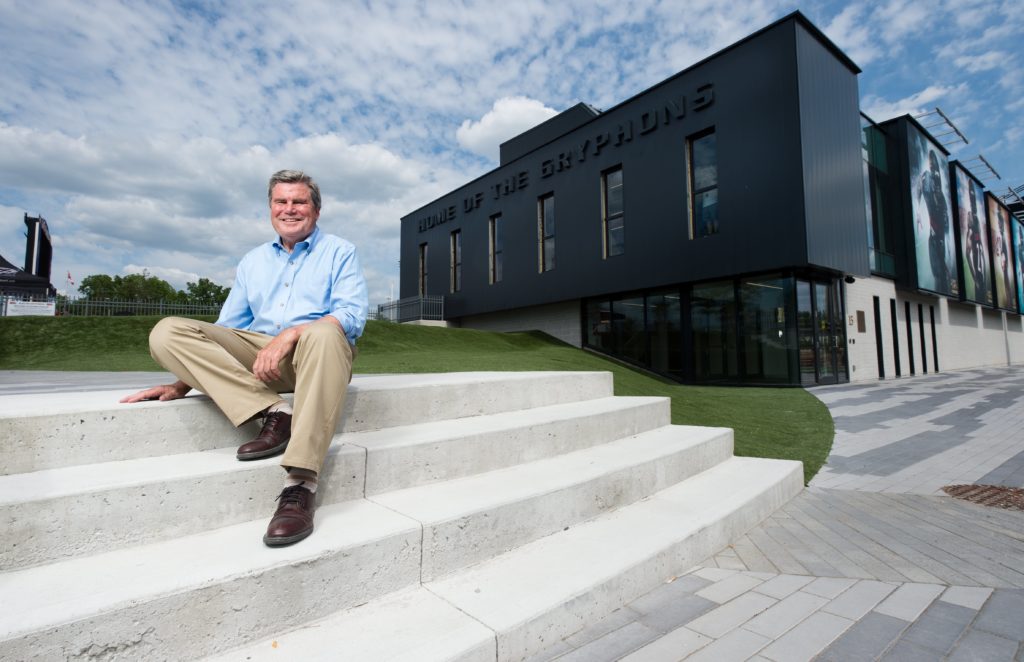 The following article was published in the September-October 2018 edition of Grand magazine.

GUELPH – Stu Lang is concerned about being judged.

Not by the myriad contacts he has in the football world – as a former Grey Cup champion and as a successful coach in Canadian university football.

Not by those who know him or who have done business with him through his leadership of a company that now boasts more than 6,000 employees and has operations on every continent.

He’s concerned about being judged by God – when Lang has to account for what use he made of the incredible gifts that have blessed him.

If you’re unfamiliar with Lang, his story is a fascinating one. To tell it from a business perspective, he’s a board member of a company his grandfather started more than 60 years ago. It began as Lang’s Lamps, making lighting products sold at department stores such as Eaton’s. Then the company changed its focus and grew exponentially under the direction of Lang’s father and later via that of Lang and his siblings.

Today, the company, CCL Industries, is in what Lang calls the “product identification business.” A core business line is self-adhesive or pressure-sensitive labels.

CCL also does the labels on white pill bottles at most any drugstore and plenty of labels found on automobiles, such as Lexus. Other companies that work with CCL include Procter & Gamble, Unilever, Heineken, Pfizer Inc. and L’Oréal.

Last year, the Lang family sold what a media release issued by CCL termed “a small portion” of their controlling interest in the publicly traded company for $333 million.

But that’s just telling Lang’s story – briefly – through a business lens. He’s also a chemical engineer. He was a five-time Grey Cup winner as a receiver with the Edmonton Eskimos from 1974 to 1981. He was head coach of the University of Guelph football team from 2010 to 2015. He’s also a happily married husband to Kim. He’s a congregant at Temple Baptist Church in Cambridge. He’s an animal lover.

Oh, and among many other things, he and Kim are philanthropists. Very generous ones at that. 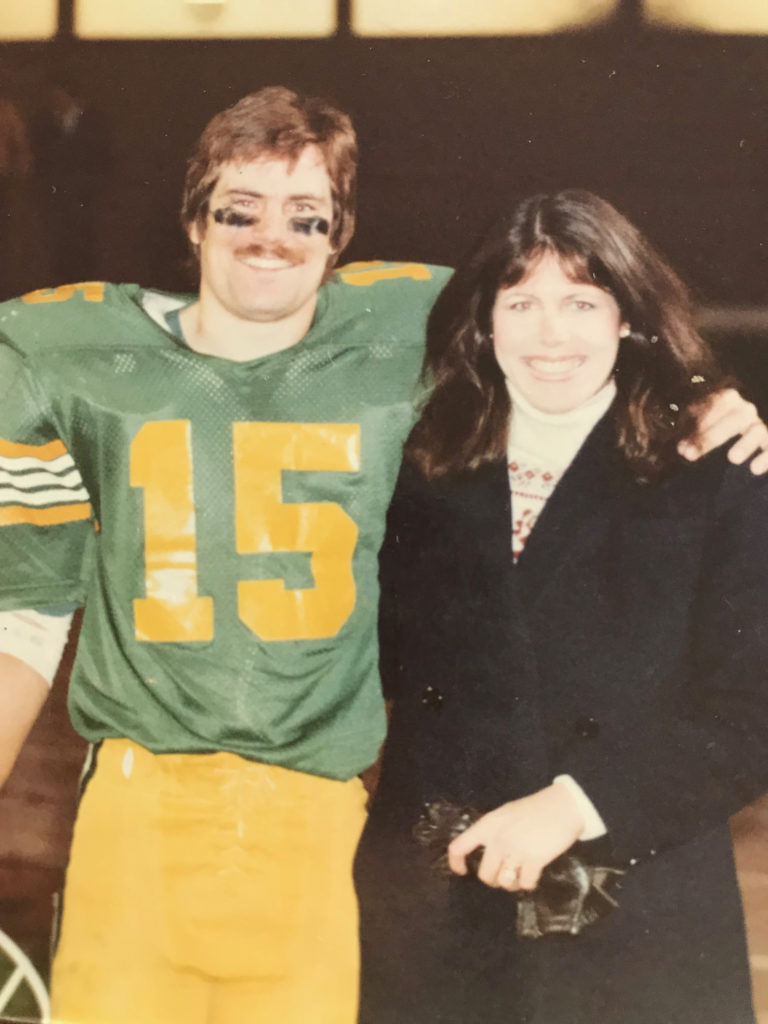 Stu and Kim Lang after a Canadian Football League game in Edmonton, where Stu played from 1974 to 1981.

Some of the Langs’ giving has been public. Their gift of $11 million to Upper Canada College to establish a scholarship program and their $10-million donation to Queen’s University to help renovate its rundown football stadium made national news. Their more recent gifts made local news: more than $10 million for a football pavilion adjacent to the University of Guelph’s Alumni Stadium; $2 million to U of G for humanities scholarships; a total of $3 million to the Ontario Veterinary College.

But other philanthropy has been much quieter. Fewer people are aware the Langs purchased an 1860s stone church in Eden Mills, paid for it to be taken down to the studs and renovated, and donated it to the Eden Mills Writers’ Festival to use as a headquarters for the annual literary event.

Much of the Langs’ giving is done through a registered charity they established and fund: The Angel Gabriel Foundation. The foundation’s Canadian Revenue Agency filings for 2017 also show support of $40,000 to the Eden Mills Writers’ Festival, $50,000 to Hillside Community Festival and $40,000 to Lakeside Hope House, a downtown Guelph church that provides myriad community support functions.

Kim, 65, came up with the Angel Gabriel name.

“The archangel Gabriel was the messenger. He was known as bringing news of joy and that’s what made me think about the Angel Gabriel (Foundation name),” she says.

“Both Stu and I are fairly privileged – very privileged – to have wonderful upbringings, and my parents certainly emphasized the idea of giving back and of service, and I guess over the years we donated little pieces, in dribs and drabs,” Kim says.

“I talked to Stu a few years ago and I said: ‘Is there some way to kind of get together and donate larger amounts of money and more formally organize our charitable giving?’ And that’s when we decided to establish a foundation.”

The Angel Gabriel Foundation’s mission statement guides the giving that it funds. That statement asserts that it has been developed to assist what the Langs refer to as “the three As” – Athletics, Academics -education and Animal welfare.

However, there is another caveat. The recipients are also connected to life experiences of the Langs. The Upper Canada College donation? Stu attended the Toronto high school. The donation to Queen’s? The Langs met at the university and graduated from it – and Stu played football for the Golden Gaels.

The University of Guelph donations stem from Stu’s work with the football Gryphons and Kim’s position on the Ontario Veterinary College Pet Trust board of directors – not to mention the couple’s love for animals. They “only” have two dogs and two cats at their Puslinch home these days. But the animal menagerie was often much bigger, typically including multiple rescued dogs and several horses. 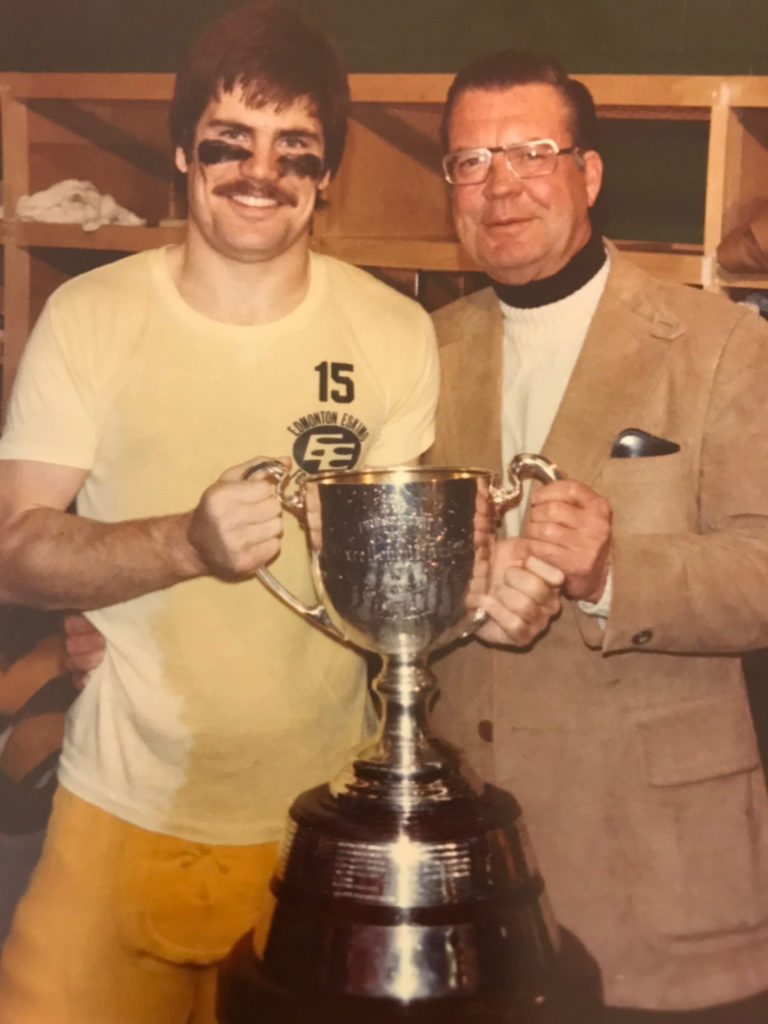 It was the opportunity to land a farm property with capacity to hold horses – near a horse trainer they had worked with – that led them to obtain the Puslinch property in the late 1980s. They otherwise had no connection to the Guelph area. Now they not only call it home, but they have also done much to establish local ties.

Stu remains on the board of directors at CCL but retired from other roles at the business in 2005. In 2009 he joined the U of G Gryphons coaching staff as something of a hobby and took on the head coaching job a year later. He offered to do the job for a salary of $1 but the university said it couldn’t do that. So, Lang was paid the going rate and then he made a donation to the school. He also made several capital investments in the team and its players, including multiple uniform combinations that became a hot topic of discussion around the league.

“There is always a return when you invest in people,” Lang says. “Because you hope that you’ll instil some values or passion or vision into them that they will change the world.

“When I was coaching, people would say: ‘Wow, you’re giving so much to your football players.’ And, I said: ‘Yes, but I always told the football players that this was a contract. You know, what I’m giving you, you now have the responsibility to pass on – whether it’s material or whether it’s a nice thought or gesture.’ So, that was always the bargain.”

Though he retired as the Gryphons coach in 2015, he remains associated with the football program in an advisory capacity and as a key player in an organization developed to build a vision for the program and links between it, alumni and the community.

In Kim’s case, she prefers to maintain a low public profile. She is on the OVC Pet Trust board and is also the artistic director of the Eden Mills Writers’ Festival.

And, without fanfare, she has recently taken on meeting with elders in the local Indigenous community to seek how to financially address gaps that exist in efforts to support challenges faced by this population. This is outside the giving provided by the Angel Gabriel Foundation.

“There are so many needs. . . . It was very difficult for me to figure out where to start,” Kim says.

The couple has also laid the groundwork for another foundation for charitable giving. The Damascus Road Foundation will focus on Christian causes. Its mission statement and terms are being finalized.

“I’ve been shaped by my two fathers: my earthly father and my heavenly father,” Stu says.

He recalls a constant refrain from his earthly father, Gordon: “He always would say: ‘Leave the world a better place than when you entered it.’ And, I think Dad lived that out. He was a very humble and generous guy.

“And, then, being a man of faith, faith is very important to my life and arguably one of the most famous versus in the Bible – John 3:16 – is: ‘God so loved the world that He gave. . .’ So, my heavenly father is a giving person. So, I just feel that I should be a giving person. That’s sort of the foundation of why I do what I do.”

Of that $333 million obtained last year in the CCL share sale, the news release indicated the funds would be in “support of philanthropic endeavours and estate-planning purposes” of the Lang family. Stu has three siblings. He and Kim have no children.

“All our wealth will end up in charities,” Lang says, speaking of himself and Kim.

Charitable giving runs in the Lang family. A sibling is also setting up a foundation to aid philanthropic efforts, Stu says.

Even as they plan their next major donation, Lang says he and his wife wrestle with not living simply enough.

He says he and Kim speak often about living “reasonably,” but he allows that they “don’t live in a shack” and they possess a cottage in the Muskokas and that he drives a Lexus.

“I believe that I’m saved because of Jesus’ work on the cross. But we will still be judged, not judged in regards to salvation. But judged on what God gave you,” Lang says.

A Lang mantra to U of G football players and to others he supports is to consider: “What are you doing with what you have?”

He says he gets excited when the players give their time and volunteer at Guelph’s drop-in centre or at the Hope House kitchen.

“Do what you can. It’s not the magnitude. It’s what you have. I’m fortunate enough to give away millions of dollars. But maybe somebody giving away $100 is doing a better job than I am because $100 to them is all they have.”

AMONG THE LOCAL GIFTS FROM THE ANGEL GABRIEL FOUNDATION