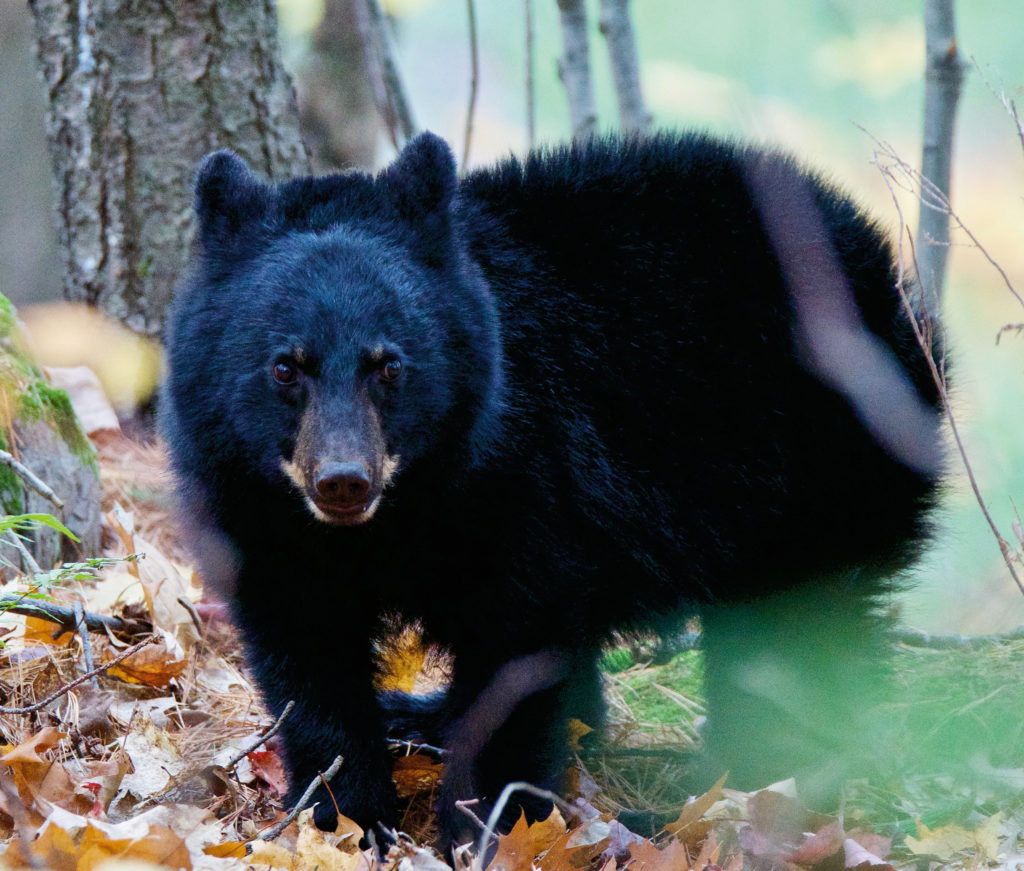 Story and Photos by Paul Gains

Temperatures were near freezing as I pitched my tent in an isolated corner of Killarney Provincial Park.

It was the last week in October, a time when park staff see few campers and it is wise to carry proof of sanity just in case they ask.

Indeed, on my visit two weeks earlier, a young Algonquin wolf had merrily trotted past my tent, eyes fixed on me, tongue hanging out of its wide-open mouth. It later poked its head out from the brush long enough to pose for a photo before vanishing. Locals have told me they see moose in the nearby marshes and I live in everlasting hope that I will capture one – on my camera. Hopefully not on my campsite.

At that time of year, most of Ontario’s estimated 100,000 black bears are worried about bulking up their figures with winter hibernation approaching. So it was a surprise when I caught sight of a cub about 40 metres from my tent.

Unaccompanied, she was foraging for acorns beneath oak trees and for the next two days I watched her feeding constantly. Apart from our initial encounter, when after setting eyes on me she sprinted into the nearby Cranberry Bog marsh, she seemed comfortable with my presence.

On my last night I was awakened in the wee hours by a loud, horrifying, husky roar followed by a whimper. I knew there was a wolf pack around nearby George Lake, and I had heard their howls each night, but this was different. It didn’t sound like a lynx or puma either. An adult bear, possibly.

I keep a survival knife handy – about 25 centimetres long – when I am camping or hiking and I instinctively reached for it. On the evenings when I am sitting next to my campfire surrounded by illuminated pairs of eyes, which I can only assume are raccoons, it helps me feel safe. But I am not sure it would be much help if a 180-kilogram male black bear tore into my tent, like they do in the movies or in one’s imagination.

Bears have an incredible sense of smell and will travel several kilometres when they catch a whiff of a food attractant. “If it’s a bear, it knows I am here,” I reasoned. “I have no food in the tent so it’s probably foraging.”

Bears generally avoid people. Moreover, there’s more chance of being struck by lightning than being attacked by a black bear. Comforted by my thoughts, I went back to sleep.

There was no sign of the cub when I searched the woods and the perimeter of the marsh after breakfast. She’d been frightened, no doubt. Before I left Killarney, the park staff told me if she was an orphan she wouldn’t survive the winter alone, so they called the Ministry of Natural Resources and Forestry to capture her.

A trap was set a few days later but she walked laps around the cage, frightened of two raccoons that were feeding on the bait. A ministry officer tranquillized her and took her to Bear With Us, one of only two licensed bear-rehabilitation facilities in the province.

She couldn’t be in better hands. 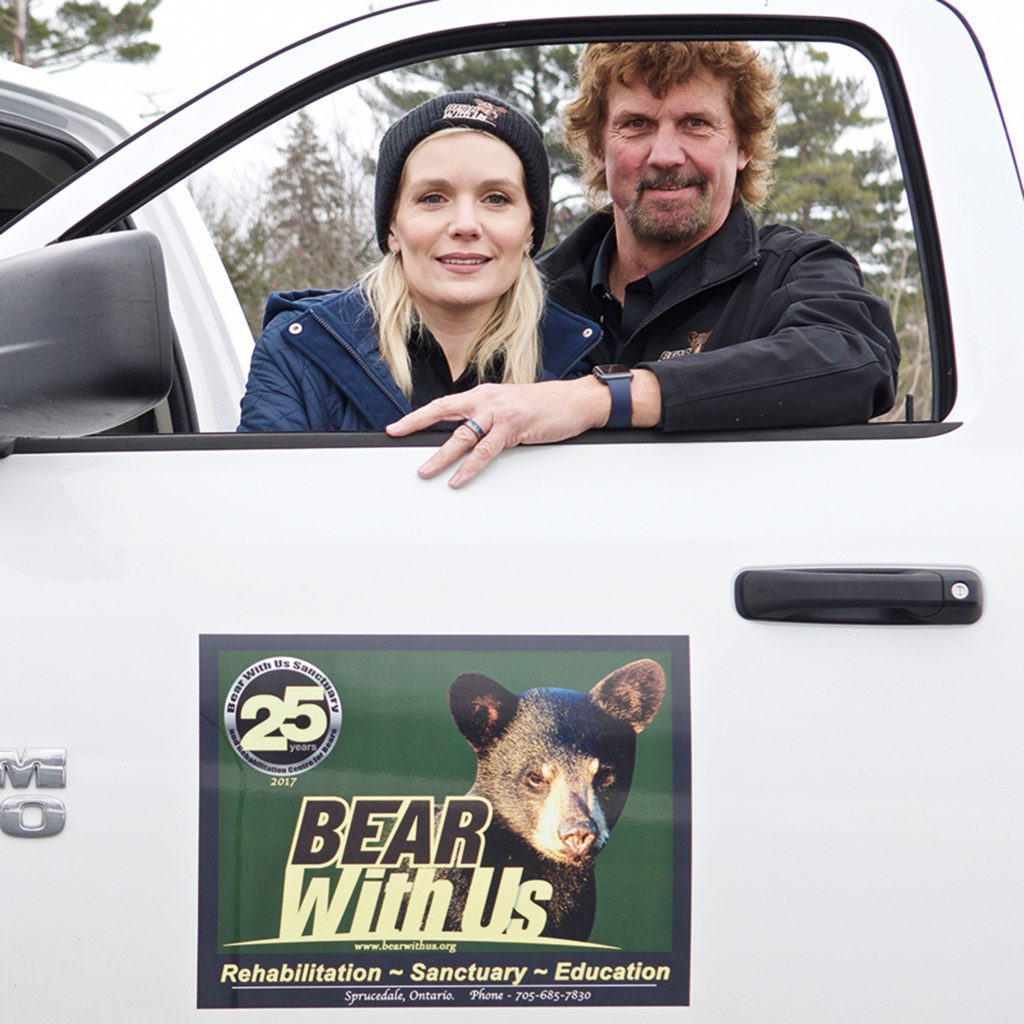 Mike and Ella McIntosh operate Bear With Us, a facility in Sprucedale, where Bear 3129 was taken to be nursed back to health.

Mike and Ella McIntosh have run this facility in Sprucedale – between Parry Sound and Algonquin Park – for more than 25 years, fully funded by charitable donations. They have rehabilitated and returned more than 550 black bears into the wild. Mike was surely a bear in a past life; his knowledge and love of bears borders on obsession.

The Killarney cub was tagged and became Bear 3129.

“She was basically starving to death. Beneath that fur she was all skin and bones,” Mike McIntosh says.

“If they have been starved, or they’ve had a lack of nutritious food for some time, their body starts to shut down. When a cub comes in, I basically have to continue to starve it and gradually feed it a little more each day.”

Her initial diet consisted of raw eggs, yogurt and electrolytes. Some of the cubs will be fattened up with dog kibble because of its high nutritional value while McIntosh pays particular attention to the amount of water they get. In cold weather this can be an issue. So, too, is the danger of infection. The facility enlists the help of Dr. Sherri Cox, a veterinarian with the National Wildlife Centre, to monitor the bears for possible parasite infection. Those infected will receive antibiotics.

Through his experience with bear cubs, McIntosh has learned the fifth day is the critical stage. If the cub can survive past that point odds are better it can be fully rehabilitated. Cubs are then integrated into larger enclosures.

McIntosh says he must limit the interaction with humans.

“One of the biggest stressors is dealing with human beings. I think a lot of it has to do with the fact I might look a lot like the person who killed their mother. Not necessarily visually but by smell. These cubs are just freaked out.”

By the time winter arrived in 2018, there were 51 orphaned cubs in care. A staggering number by anyone’s count. The last two arrivals visited a Sudbury veterinary hospital first – one had been hit by a train, resulting in a skull fracture, while the other was caught in a leg trap for several days. Sadly, the latter did not survive the frostbite and infection it suffered, leaving McIntosh with 50 to care for over the winter.

“These cubs wouldn’t be out in December if they were with their mothers,” he says.

Jeremy Inglis, a bear expert for the ministry, says a plentiful fruit crop meant mothers had as many as four cubs last year. But the reason for so many being orphaned isn’t clear.

“People are entitled to protect their property and, in doing so, can dispatch bears,” Inglis says. “Females get shot in those scenarios. In hunting season, they are occasionally shot. There are any number of things. Typically, an adult female has a pretty low rate of mortality otherwise.”

Most people are afraid of bears. But, contrary to what most city dwellers have been taught, black bears are omnivores, eating little meat, though a small mammal might do in a pinch.

This fact is underlined at the bear rehab facility. In October alone, McIntosh bought almost 2,300 kilograms of apples and copious amounts of sunflower seeds for the cubs to eat.

Bears are social animals that do better in a group so, to prepare for their hibernation, McIntosh constructs a plywood “den” and places it inside the 275-metre-long enclosure.

“I used to make a bunch of different boxes and put them in the enclosure, thinking four or five cubs would inhabit each box,” he says. “Well, if there are 20 cubs in the enclosure, they all try to go to the same one. So now I make one big one because they all want to stay together anyway.”

The image of this mass of bear cubs huddled together is heartwarming and as a photographer one I would love to capture. But Bear With Us doesn’t allow visitors. Human contact, after all, is the likely reason the bears are orphaned.

Most of the cubs are orphaned because of hunting, McIntosh says. “Then there is other human activity, the odd road kill, even though compared to deer and moose it’s kind of rare. But it still happens. Then there is the illegal hunting aspect of it.

“People just shoot one because they are afraid of it. Or they don’t want it around. . . . No matter the way you cut it, it’s human activity.”

The Ontario spring bear hunt was reinstated in 2014 as a pilot project that has been extended through 2020. There is also a long-running fall bear hunt.

Mark Ryckman, a senior biologist with the Ontario Federation of Anglers and Hunters, says most hunters follow ministry rules. Fines of up to $25,000 are deterrents to illegal hunting of black bear sows, he says.

Research indicates cubs remain with their mothers for up to two years. The cub I encountered was likely born in December 2017, making her 10 months old.

Ryckman says there is a wide range of potential reasons for cubs to be orphaned.

“Probably the greatest impact would be collisions with vehicles where the mother is killed by a vehicle and cubs orphaned as a result,” he says. “To a lesser degree, I don’t think it’s overly common, cannibalism by adult male bears.”

A spokesperson for the Sudbury provincial police detachment, which covers Killarney, says collisions with moose, deer and wolves are far more common than accidents involving bears.

One Northern Ontario hunting guide, Derek Mansell of Shining Tree Camp, says guided hunters are not the problem. Rather, he points to resident hunters.

“They are not required to be guided and are not educated on bear hunting unless they take it upon themselves, which most don’t,” he says.

“Hunters are great for being in a constant state of denial,” he says. “Bears don’t tend to be dangerous anyway. The more (hunters) make people afraid of them the less people object to how people kill them, and they have got that down to a science.

McIntosh believes we can and must coexist with bears. As cottage country opens up to springtime travellers, he advises there are many precautions that should be considered to avoid a negative encounter.

Let the bears know you are coming by making noise. Talking loudly is good. Singing is even better. No bear has so enjoyed my singing that it has come out looking for an encore. Carrying bear spray is wise. Leaving pet food on the cottage porch or in bird feeders, McIntosh says, is not.

“If you come across a bear that doesn’t run, there is a real good chance that bear was fed by somebody,” says McIntosh. “This happens in parks. People think it’s really cool to throw down some food to get a photo or brag about it. That doesn’t make that bear dangerous, but it makes him look to the next person for food.”

Another issue is people allowing dogs off leash in bear country. Dogs will antagonize bears, McIntosh says, and a bear will sometimes give chase. The dog invariably leads the bear back to the owner.

As for Bear 3129, the cub was doing well when she went into hibernation, cuddling with four new friends. She is expected to be released back into the Killarney region in July or August.

“I feel relieved when they go free because that’s where they belong,” McIntosh says. “I know that even though their life is a challenge because there are so many human beings around, it’s still better than being in a cage.”