Kids’ books overflow with compassion, humour and a strong sense of place

Waterloo author Heather Smith unfurls a scroll of rejection letters from publishers that she taped together to teach children about determination. The parade of “no” letters is so long that she steps outside a classroom’s door to unroll it all the way. Smith, author of at least nine picture books, middle grade and young adult novels, wants children to understand that success isn’t instantaneous. “You’re going to get ‘no.’ It’s not just about writing,” she tells them. You might be trying out for a sports team or a school play. “There will be doors closed in your face and you keep trying.” Rejection isn’t a word that comes to mind when you read Smith’s books, inhabited by characters with personalities so vivid that you feel as though you’ve just met them on the street. What’s more, if she taped together all the awards – and these are big awards – that she has won for her books, that scroll would fly out the door too.

Smith is “one of the leading young adult authors in Canada,” says St. John’s Libraries in its successful nomination of her young adult book, “Barry Squires, Full Tilt” for the prestigious Dublin Literary Award. Smith, who was born in Newfoundland, was excited to have been long listed for that award, for which libraries around the world provide the nominations. The fact that it’s her hometown hangout, St. John’s Public Libraries, that chose her book is icing on the cake. “Barry Squires, Full Tilt” revolves around a very funny, quick-tempered 12-year-old boy who has a birthmark on his cheek and a burning desire to join the popular Full Tilt Irish Step Dancers in St. John’s. When faced with calamity and tragedy, he’s helped by friends and loved by his witty, Catholic family that Smith says is a lot like her own in Newfoundland.

Smith, 53, hard-working, funny like her characters, with an empathetic way of portraying kids on the fringes of society, doesn’t talk much about her long list of awards. They’re lovely, but she’s just as happy to be known as a “teller of tales and a bonafide twit,” says her website description of herself. Smith grew up in St. John’s, N.L., with her parents, two brothers and two sisters. The colour, characters and spirit of her birthplace permeate her books. “Growing up in St. John’s and walking through the streets of St. John’s and downtown St. John’s, you’re kind of assaulted with lots of colour and lots of colourful language and humour and turns of phrases,” Smith says. “I think I’m lucky to have this world where I can extract all these little tidbits to make the writing more interesting.”

Smith didn’t start out as a reader or writer. When she was little, she had a speech impediment that got in her way of expressing herself. She searched for synonyms that would allow her to say words that didn’t show her lisp. Speech therapy helped resolve the problem quickly in primary school, but her ability to find words endured. As a teen, Smith entered Memorial University in Newfoundland, interested in linguistics or speech therapy, but left after second year. There, she met her future husband, Robin Smith, who had moved to Newfoundland from Scotland with his parents when his marine biologist dad was taking part in an exchange program. With jobs in the same fundraising company, she and Robin left Newfoundland in 1993 to live in Ontario, Scotland, Las Vegas and Guelph. Robin retrained in information technology and got a job in Waterloo where they moved in 1999, coincidentally to a neighbourhood with street names like Lobster Lane, Schooner Crescent and Grand Banks Drive. Here, she and Robin raised three children, Duncan, 25, Rosie, 22, and April, 16.

Their bright, spacious home is filled with eclectic reminders of Newfoundland. There are stars hanging at the front door, a glass fish with sea glass inside, and a photo on the wall featuring an image of capelin fish, a small, silver fish that rolls on the shore with the waves at spawning time. It’s a popular sport for people to put on their boots and collect the fish when they come in, she says. One time, “I didn’t have a bag so I emptied my purse and put capelin in. My Mom fried them up.” Her purse smelled for quite a while after that. Then there’s her collection of little skeletons, a vehicle for her quirky humour. Smith, whose eyes behind round glasses and underneath a short head of hair are as lively as her sense of humour, dresses them up to suit the season or holiday. Don’t be surprised if they’re wearing inflatable swim rings and lobsters next time you see them. Their home also has memories of her husband’s home country, Scotland. The couple lived there before they had children, and Smith got to know his marine biologist father and his craftsperson mother who inspired the eccentric and wise grandmother in one of her books.

Smith’s characters are unforgettable. In their lives, they encounter real-life problems like alcoholism, death, bullying, loneliness, sex abuse, homelessness, absentee parents, depression and racism, subjects that Smith handles with sensitivity. “I don’t want to write books about particular issues, but I don’t want to pretend the issues don’t exist in a particular world,” Smith says. “Writing it like it is and keeping it fairly straightforward can somehow be more powerful than overwriting it.” 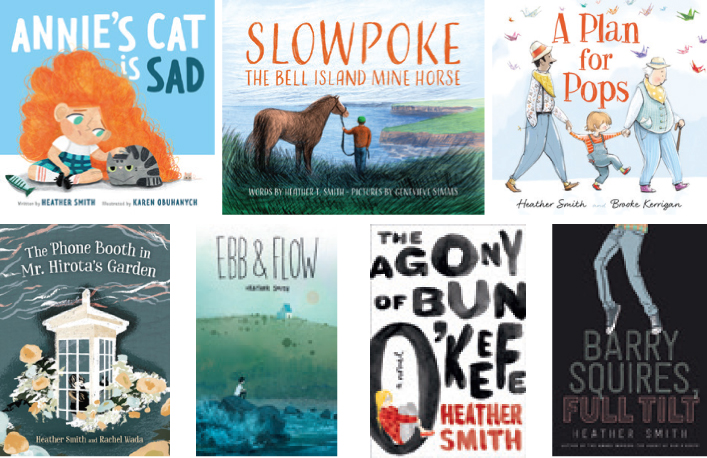 Here are a few examples of the characters who inhabit her stories:

• In “The Agony of Bun O’Keefe”, Bun is an isolated 14-year-old girl whose mother is a compulsive hoarder. The naïve, lonely girl ends up on the streets of St. John’s where she meets characters like protective Busker Boy, drag queen Cher and Dragon Man, a landlord to be avoided.

• In “Ebb & Flow”, written in free verse, Jett, 11, is a gentle boy in a new town who falls in with a bully and does some nasty things after his family suffers a tragedy. After a “rotten, bad year,” he’s sent to the coast to spend time with his kind, eccentric grandmother with pink hair and an all-encompassing hug.

• In “Slowpoke: The Bell Island Mine Horse”, a picture book, Jimmy, 11, nervously sets out to work in a Bell Island iron ore mine after his father was killed in a mining accident. He draws courage underground from a special horse that pulls the ore carts.

• In “Barry Squires, Full Tilt”, Barry is supported by a lively cast of characters including Uneven Steven, an old British rocker, and a group of old people from the One Step Closer to God Nursing Home.

Smith likes to think about the reader who loves her books. A troubled teenager wrote her that she reads and re-reads Smith’s first book, “Baygirl”, when she feels like she might self-harm. She connects with the main character and feels she isn’t alone, she told Smith. In “Baygirl”, 16-year-old Kit Ryan’s fisherman father is an alcoholic who loses his job during the 1992 cod fishing moratorium. The family moves from its small village to St. John’s where Kit is ridiculed for her accent and small-town origins. She struggles to find her way, finding friends who help her see beyond her unhappiness.

Another reader told Smith that her picture book, “The Phone Booth in Mr. Hirota’s Garden”, helped with the grief they felt over the death of their father due to COVID. The story features Makio, a boy in Japan who loses his father in a tsunami. His neighbour builds a phone booth on a hill, giving Makio and others an opportunity to feel close to and talk to those they’d lost. The story is reminiscent of a real-life phone booth built by a Japanese man to help him cope with the death of his cousin in 2010. When a tsunami struck his coastal town, mourners used his disconnected phone to help them too. Smith asked the man for permission to use his idea in a story. Smith’s ability to make people feel and to laugh no matter how tough things are is a gift, says Nan Forler, a fellow children’s author, close friend and neighbour.

Forler, Smith and children’s author Kathy Stinson of Rockwood are longtime writing buddies who listen to each other’s ideas and critique each other’s writing. They all met at a writing workshop held by Stinson at Waterloo Public Library more than two decades ago. “Heather is one of the funniest people I know,” says Forler, whose picture book, “Rodney Was a Tortoise”, was recently published. “She has a self-deprecating humour, sharp and irreverent,” she says. “She has a lot of compassion for her characters” and her characters’ dialogue is right on. Smith is one of the “Canadian kid lit royalty. She’s also very humble. She wins awards and contracts and we find out through social media,” Forler says. Smith writes every day, taking breaks to work on a puzzle with her son or have a cup of tea. She’s had at least one book published a year in the last five years and she’s now working on more novels for which she has book deals. A new picture book is coming out in June and two more are forthcoming.

These days, Smith could use a fix of Newfoundland but the pandemic has kept her from visiting family for two years. She hopes she’ll see them soon and she loves to meet up with fellow Newfoundlanders who “chat the ear off me.” It’s makes her happy and energized, not to mention that it gives her tons of ideas. “I say, ‘OK, keep talking,’” she says with a laugh.