“Ospreys soar above their isolation: if they could do it, couldn’t I?” 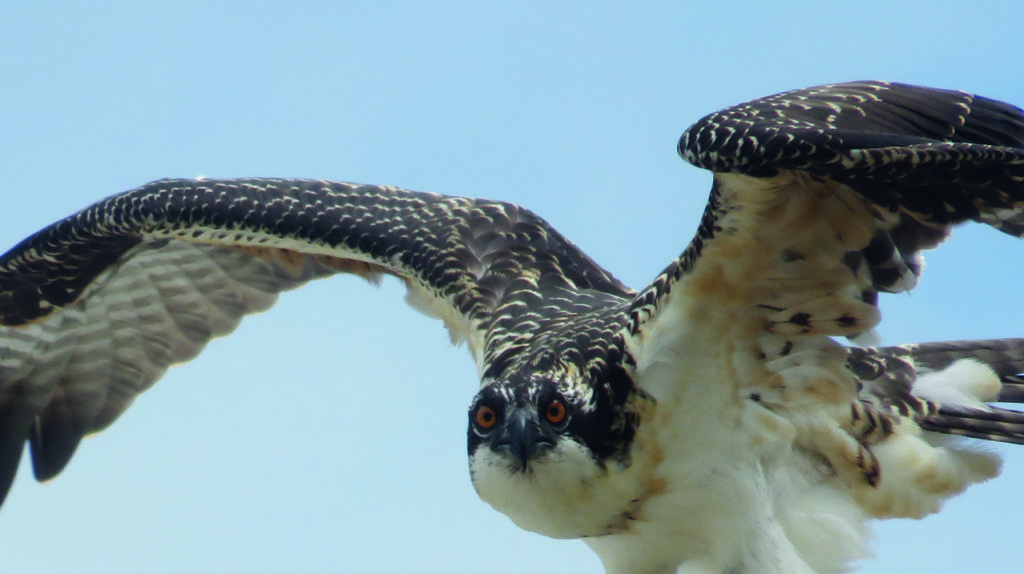 Story and photos by Barbara Aggerholm

When Nana was fighting COVID-19 in a lonely hospital room, when my house seemed to be closing in on me, when an annoying neighbour fired up every power tool he owned, I fled to one place that gave me solace. An osprey nest.

The majestic raptors, known as fish hawks, built a nest on a human-made platform on the end of a pole so high it scrapes the sky. It stood, alone, in the middle of a field overlooking a small valley in Waterloo. It was March and we were all deep into self-isolation in our homes at the advice of medical officials, lest we catch the potentially killing virus from an unsuspecting family member, friend or stranger. I would park my car in the parking lot outside a forested trail and watch the osprey pair carry sticks, bits of plastic, strands of string that would become a sturdy, though untidy-looking nest. An older couple, whom I imagined had left behind a cramped apartment in the city, were frequently there before me. She knitted in their parked car while he read the paper, both looking up as I did at the birds wheeling and diving. We’d smile at each other as though sharing a secret. I was comforted by the ospreys’ utter isolation – if they could do it, couldn’t I? Some days it rained, another day it unexpectedly snowed. Then the hot, hot sun beat down upon the solitary nest. But still the osprey couple stayed, hunkered down on the nest so far that I could barely see the top of their heads. Until one raptor would launch from the nest, a flash of black and white and chocolate brown so fast that I couldn’t raise my camera quickly enough before it was gone, headed in the direction of the river a short distance away. 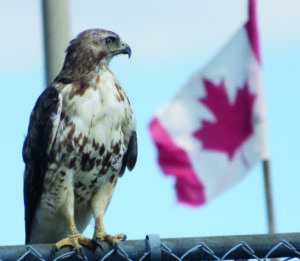 I held my breath as I watched the two ospreys perform a sky dance together, a courtship in the wind. When they flew, flapping or soaring on wind currents with long, powerful wings outstretched, I didn’t think about my mother-in-law dying of the virus that she’d contracted at the hospital where she was being tested for dementia. I didn’t think about the future for my 23-year-old daughter and her boyfriend living with us for now, and for other young people anxious to make their own way. I didn’t think about what I would make for dinner. I was transfixed by the poetry of the ospreys’ flight and I felt a bit of the freedom that they revelled in. I have watched these birds all the months of COVID-19 isolation. I saw them perch imperiously on a tree branch, watching me just as closely. I saw an osprey fly home with a fish grasped in both talons, the fish facing headfirst like a missile for better aerodynamics. I saw the male drop from the sky to mate swiftly with the female on the nest and leave again just as swiftly. Afterward, she seemed unruffled, expectant. The birds’ loyalty to each other, their returning to the nest with fish for the other to share and the female’s patient sojourn on the nest helped make me feel that the world was OK. Despite everything that was going awry, the raptors seemed untouched by it all.

It became almost an obsession of mine to photograph these birds at every stage of their family life. Aided by my camera lens, I felt elated to glimpse their wildness in the dark pupils of their round, unblinking eyes. I waited for hours to see them soar, vanishing above the trees with a wingspan of almost two metres. I visited the dead tree on the edge of the woods where I knew that at least one bird would be perched, its curved beak tearing at a fish clutched in one claw. I listened for their high-pitched calls. I waited by a pond and tramped along the Grand River to see if I could spot what I knew would be a fierce dive fully into the water before lifting off with a fish that might rival them in weight. The sight eluded me – a goal for next year – but I felt privileged to photograph a great blue heron stab the water and come up with a fish dripping from its bill. Nearby, a lineup of five turtles sunned themselves on a half-submerged log.

Since I first spotted the ospreys, my strong, vivacious mother-in-law has died of COVID-19. The virus prevented us from being at her hospital bedside. My neighbour continues to buzz-saw the hell out of his backyard and my nephew still can’t cross the border to come home from the U.S. where he is a university researcher. My daughter and her boyfriend wear masks and social distance at their part-time jobs, and race for the shower as soon as they get home. I try not to bump into confused or oblivious shoppers who are going the wrong direction in grocery store aisles painted with arrows. But my worries feel so much less when I round the corner in the car and spot the nest in the sky. They disappear when I see for the first time that the eggs have hatched; the birds are thriving. That day, I photograph two small, wobbly heads sticking out above the nest to peer at the sky. I wave at the older couple in the car beside me and head for home, feeling lighter, a little like what I imagine an osprey might feel riding the wind before landing at home where her family awaits. 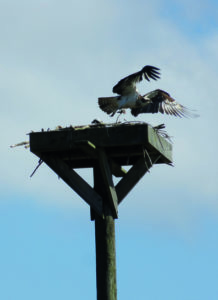 Postscript: It is September and I have watched fledglings grow, try awkward flight and eat fish they have caught themselves. The ospreys are leaving for southern places now, and I go daily to see if I can catch a last glimpse of them before they go.

Of two nests I’ve watched, one on the end of the pole and one on a light stand over a ball diamond – with five eggs in total – I see that three young ospreys haven’t left Waterloo Region yet for their dangerous journey to the southern United States and beyond. The adults are already gone, having left their migrating offspring to rely on instinct. I search the skies, expecting the young ospreys to be absent any day now. It feels like a gift those times when I still spot them dancing in the sky, but I find myself worrying that they’re leaving it late.

Next spring, I’ll look for them again. I expect so much will be different in my world then.