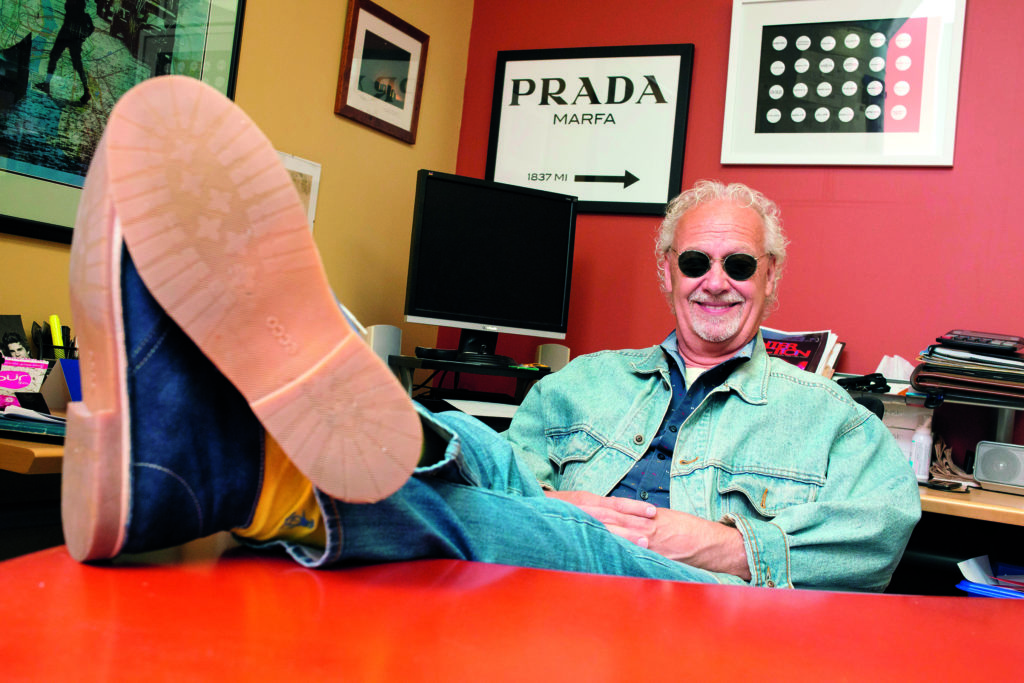 W hen a helicopter tugging a humongous banner to promote the Rolling Stones exhibit “Un-zipped” flew along the Lake Huron shoreline last summer, people who know him joked that David Marskell — proud proprietor of Kitchener’s TheMuseum — was probably in the cockpit, working the controls.

Ha ha. As if the head of a major cultural institution would be flying a helicopter to advertise one of his own exhibits.

So when I joke with the tireless pitchman about the preposterousness of this notion, I’m surprised when he responds with an awkward silence, followed by a nervous laugh.

No, he informs me politely, he wasn’t flying the damn helicopter.

He was — ahem — in a chartered plane right behind it.

“I went up in a small four-seat Cessna to film it,” he trumpets proudly. “It’s the showman in me!”

Give Marskell credit: he doesn’t stand on ceremony. He knows what it takes to run a modern-day museum in a fast-growing Canadian city. And he goes to the wall every time.

This is going to bring tens of thousands of people to this community,” he says of “Unzipped,” which will encompass six decades in the life of the Rolling Stones when it touches down at TheMuseum Nov. 30 to Feb. 27 on its only Canadian tour stop.

“We’ve already sold $100,000 in tickets and 60 per cent are from outside the community. I’m trying to sound as humble as possible, but my background is in marketing. And having a shot at marketing one of the biggest bands in the world, I’m not embarrassed. It’s AWESOME!”

Let’s be clear about one thing: if not for his ambitious attempts at pursuing, procuring and promoting out-of-the-box attractions that push the envelope, there probably wouldn’t even be a museum on Kitchener’s King Street, let alone one bringing in world-class attractions like “Un-zipped.”

When the former marketing manager at Toronto’s Canadian National Exhibition took over leadership of what was then the Waterloo Regional Children’s Museum in 2006, it was on the verge of financial collapse, appealing to a grade school clientele with poorly attended exhibits that were sinking it further into debt.

Within five years, he had transformed this noble, sputtering failure into a cultural powerhouse, embracing crowd-pleasing exhibits like “Titanic” and “Avatar,” turning it into an all-ages mecca for pop culture, tech and everything in between.

And as the world emerges from the worst pandemic in a century, and people venture tentatively back into public spaces, he’s hinged its economic recovery on what seems like the closest thing to a sure bet: the World’s Greatest Rock and Roll Band.

“It’s a huge win,” confides the ecstatic frontman, who used TheMuseum’s “built up credibility” to snag the rights.

“A world-class event for a deserving community.”

W hen they formed as a band in 1962, it’s unlikely the Rolling Stones — young, defiant, unemployed — thought that 59 years later they would be the focus of a multimillion-dollar travelling exhibition.

Or that its most popular feature would be a recreation of the dingy, garbage-strewn Chelsea apartment band members shared in the years before fame came calling.

But life is full of surprises.

And as the iconic Hall of Fame legends continue to tour and record in the 70s — their ages, not the decade — their legacy as rock survivors has decreed that unlike, say, Gerry and the Pace-makers and the Dave Clark Five, their history be preserved in accessible, user-friendly form.

“They don’t like to look back,” points out Ileen Gallagher, the New York curator of the 300-artifact, 10,000-square-foot “monster” that is taking over TheMuseum for three months.

“They’re always looking forward, so we’re trying to keep the exhibition as current as possible.”

It’s been the key to the Stones’ success — never rest on your laurels, never stay in one spot.

And as they moved from R&B to psychedelia to the sinewy blues rock that defined their late 1960s career peak, they never went out of style.

Even when they flirted with falsetto-whooping disco — the kiss of death for many acts — and jokes about “Rolling Bones” gathered steam during their 1989 “Steel Wheels” comeback, they remained part of the pop culture fabric: not trendy, but trusted, dependable, like a worn-in pair of Reeboks or a Honda Civic.

But how to create an exhibit that would do justice to a band that, by refusing to go gently into that good night, ensured no one would ever forget them?

“I think it’s really important to understand how much the Rolling Stones have impacted popular culture,” notes Gallagher.

“Not just their music, but fashion, film, photography. They realized early on it wasn’t just about music, but image.”

That’s the crux of this immersive showcase, which opened with much fanfare in London six years ago with a career spanning display of instruments, album art, clothing, photographs, stage designs, personal diaries, concert clips and recording studio.

And, of course, that pre-fame apartment that existed, until this exhibition, solely in the memories of those who lived there.

“It’s so evocative of a moment in time,” notes Gallagher of “a young band that had nothing, a work-in-progress.”

After 15 months of marketing hype, “Unzipped” will not only be the biggest, most expensive ex-hibit ever hosted by TheMuseum, but also the fulcrum for a slew of companion events/exhibits that will, Marskell insists, benefit the entire region.

• The Ronnie Wood Art Exhibition in a newly transformed gallery in Uptown Waterloo (on King Street beside Starbucks).

• A series of accompanying films screening at the Princess and Apollo Theatres.

• “Frock On: A Century of Fashion and Pop Music” at Cambridge’s Fashion History Museum.

• A Stones merch store at TheMuseum.

• Persistent (unconfirmed) rumours of a visit from an actual Stone.

“Bigger than the Memorial Cup or the Juno Awards. ‘Exile on King Street.’ It will take over our entire building and put Kitchener on the larger cultural map.”

Why the Rolling Stones? And why now?

“It happens to be a ‘Stones Moment,’” notes University of Waterloo history prof Andrew Hunt.

“Partly this owes to their continuation as a band. The Rolling Stones are still together with most of their original members. Some people like to poke fun at them for their age, and especially at Keith for his mind-blowing endurance. But they’re still energetic performers and better musicians than ever.”

Shortly after this interview, Stones drummer Charlie Watts died at 80. What happens now? Mick Jagger is 78. Keith Richards is 77. These are not young men.

And yet, there’s a sense — to this day — that unlike the Beatles, frozen forever in a pristine, 1960s time bubble, or Elvis Presley, who descended into shambolic parody in the years before his death, the Stones are ageless, both of our time, yet somehow apart from it.

“I didn’t feel like I was talking to old people looking back on being young people,” confides Gal-lagher, who sat down with band members during the exhibit’s inception.

“They’re still performing. I didn’t feel like I was talking to has-beens.”

When you watch video clips of 78-year-old Jagger performing “Sympathy for the Devil” with the same pouty insouciance he did 50 years ago, growling with satanic fervour “I was around when Jesus Christ had his moment of doubt and pain,” you almost believe he’s telling the truth.

“They have a sense of bacchanalian otherworldliness,” points out Bob Thompson, pop culture prof at New York’s Syracuse University.

“Not only do they continue to perform, they do it in a way that doesn’t make them look pathetic. Everything tells us they shouldn’t be, couldn’t be — even Jagger’s appearance has a sense that he doesn’t know it’s not 1969.

“He’s still behaving as he should be in our memory, not in real life.”

The death of Watts, like that of founding member Brian Jones and departures by Bill Wyman and Mick Taylor, will do nothing to change these perceptions.

“I actually get a lot of students in my first-year course on the history of rock ‘n’ roll who love the Rolling Stones,” says Hunt.

“As a ’60s historian, I always anticipated the allure of the era would eventually fade, but it really hasn’t.”

“People are looking for authenticity, which often involves searching out classics that withstand the test of time. Albums like ‘Aftermath,’ ‘Let It Bleed’ and ‘Sticky Fingers’ still pack a hell of a punch on vinyl.”

So the Stones walk a fine line between nostalgia and living history, a modern day conduit to a golden age when music mattered, beats referred to drums — not headphones — and a rebellious rock tune could change the world.

“That insurgent spirit speaks to people in our day and age — young and old — drawn to a band that managed to extend a middle finger to the constraints imposed by cultural gatekeepers and guardians of morality,” notes Hunt, pointing to the current dearth of pop culture mavericks.

“Naysayers can talk about them overstaying their welcome, and maybe there’s a grain of truth. But it’s difficult not to have a grudging admiration.”

For more information about the Kitchener exhibition, go to www.unzippedkw.ca.