Sometimes dreams are so ridiculously huge that bringing them to fruition seems improbable.

Then there’s Laura and Will Feenstra, a couple from Inverhaugh who admittedly didn’t have a lot of money when they purchased a $1-million-plus property with plans to install a new concept in holiday rentals – four 12-metre sea-shipping containers converted into luxury accommodations.

Their dream took shape at a time of personal chaos and uncertainty. Will, 41, laughs when he recalls suggesting that his wife think outside the box as they searched for a way forward. When she pitched the idea of shipping containers, he said, “Just how far outside the box were you thinking?”

Laura joins his laughter. “Actually, I was thinking inside the box,” she said, meaning the metal shipping containers.

The couple has four children ranging in age from nine to 16. Will is a part-time youth pastor and a youth counsellor with Kitchener-based Crossways to Life. Laura trained as an interior designer, worked as a home stager and ran a wedding planning business.

Then their eldest daughter fell ill, spent months in hospital and nearly died.

Laura, 37, had to shut down her business and work as a receptionist in her father’s investment company just so she would have the flexibility of time off when needed. The couple had a burning desire to find a property where they could create both a serene counselling space for Will and a place for Laura to run weddings as well as holiday rentals. B&B? Perhaps, but she learned the market is pretty saturated, particularly in Elora/Fergus. Besides, it would require making breakfast for the guests every day. Then she struck on the idea of converting shipping containers.

Paul LeBlanc, owner of Van Blanc Ent., a Brantford company that sells new and used sea-shipping containers, wasn’t surprised when the couple approached him with their idea.

“More people are buying boxes to convert,” he says. “Aside from being just storage, they are making them into dwellings.”

At about $2,000 for a single-use container (meaning it comes from China loaded with cargo and is sold in Canada empty), it’s not an expensive option.

For the Feenstras, it was just an idea for a long time, a seemingly unreachable goal, but then their daughter’s illness changed everything. If Laura was going to continue with her wedding planning, she couldn’t commit to booking rental spaces and perhaps having to cancel.

“We realized life is too unpredictable,” says Laura.

“If we were going to do this,” Will adds, “we needed our own property.”

And so began the hunt for a tranquil setting where the youth he counselled as well as the customers coming to stay in the rentals would find peace, preferably close to the healing power of flowing water.

With little more than the equity in their Elora home, the couple launched a two-year search, one that provided little more than one disappointment after another. The properties were either not suitable, had a bad location, or were not available for rezoning as holiday lets.

“The township said ‘no’ to most of them,” says Laura. Will adds a long list of requirements set forth by the township, including environmental studies, noise bylaws, parking lot size, adequate septic beds, among others. And if the property had to be rezoned, that could triple the property taxes.

But then there was that acreage on the banks of the Grand River, in the tiny hamlet of Inverhaugh, about halfway between Elora and Conestogo on Wellington Road 21 – a property they would call Inner Joy Getaways.

The property was owned by Jan and Bart Singh who purchased the former cow pasture in 1994 and turned it into a private, internationally recognized cricket club, with a 4,000-square-foot house and about three hectares of land. The property also has forest, a lawn tennis court, a six-hole chip and putt golf course and superb brown trout fishing in the adjacent Grand River.

It was perfect. Except for the price tag, which had been set at $2.5 million when it first went on the market in 2013.

Singh’s brother is Roy Singh, a Kitchener mortgage broker and real estate agent with Century 21. He’s candid about his brother’s stubbornness in setting the price at $1 million more than it was worth.

“My brother’s an accountant and he wouldn’t listen to advice,” says Singh, who figures he spent upwards of $20,000 just in advertising the property for the six years it was on the market. When the Feenstras first came to him, Singh understood they did not have the cash to buy the property at the asking price, but he was confident he could work a deal for them.

“I showed them the property two years ago, but there was no way they could have pulled it off,” he says. When they returned for another look last year, Singh began formulating how he could help.

“They needed someone to structure the deal,” he says, noting he purchased their Elora home and brokered a deal between his “now motivated” seller, a.k.a. his brother, and the eager buyers, the Feenstras.

“It was a very complicated deal,” he admits.

Laura adds, “It was over $1 million, we don’t have that kind of money,” but she also recalled asking Singh, “Do you want to dream with us?” Luckily, he did. 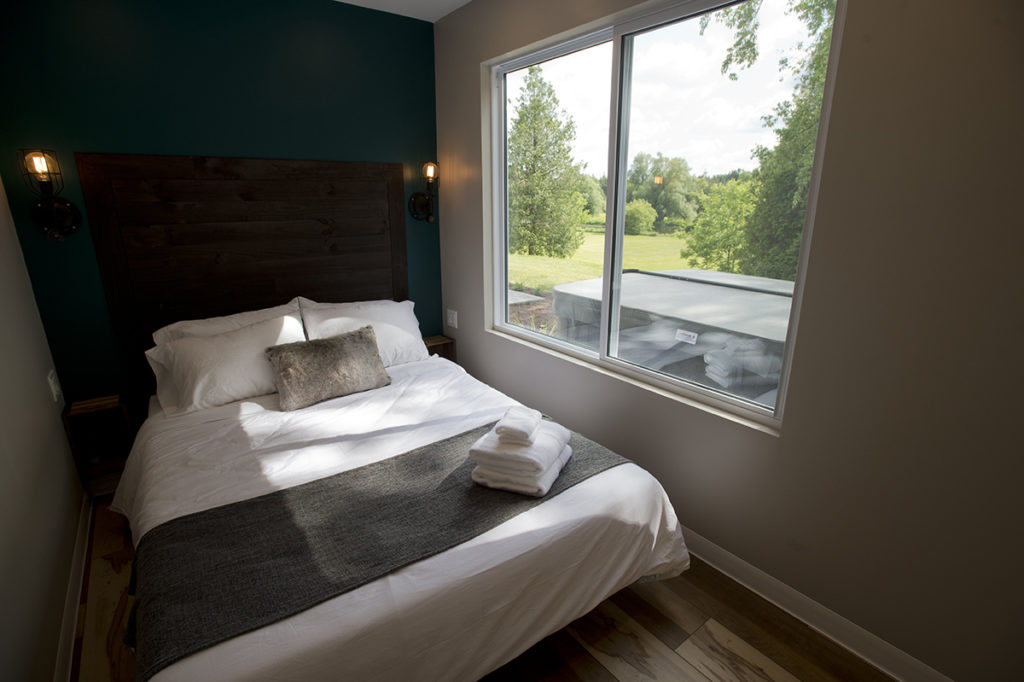 The last day they went to see the property, Will happened to have one of the troubled teens he’d been counselling with him. The couple saw a remarkable transformation in the boy once he walked the property. His whole demeanour changed, a sense of calm came over him and the Feenstras knew they were on to something.

The property would combine Will’s passion for counselling youth and Laura’s passion for design and wedding planning, but all those plans to create an oasis came with a lot of stress.

A major complication was dealing with the township, which had to approve placing metal containers on the property. Nothing like it had been tried before so there was no precedent or bylaw or any rules in place. This was quite the conundrum.

“The township never heard of this,” Singh says. “They had to engineer and create everything.”

He says that when dealing with any municipality, there is always just one more thing they need to clarify, one more rubber stamp, “which creates more delays.” In the case of the Feenstras’ big dreams, the fact it was a new concept added another layer of complication.

Finally, after leaping through every hoop presented to them, the couple had all the approvals and they only need two minor variances in the zoning.

They moved into their home last fall. In February the four steel containers were delivered – in the dead of a freezing cold and icy winter – and Will began preparing the containers, first cutting holes for windows and doors.

By spring they wanted to move the units onto their permanent bases, but the wet weather caused problems.

“Getting them into place, it was a soup bowl this year,” he says.

Once the ground was solid enough, the units were finally placed in their permanent locations by crane, locked onto concrete platforms overlooking the golf course and the river. Then the real work began: painting the exterior a deep shade of blue, installing the required six inches of insulation, installing hydro and a heating/cooling wall unit.

And there were many unpleasant surprises such as when they learned they needed to add more insulation, amounting to an unexpected cost of $10,000.

Laura did all the interior design. Will, who grew up on a dairy farm, knows his way around a tool box and did much of the grunt work. Friends and family also helped.

Each unit is named after a village: St. Jacobs, Elmira, Elora and Fergus, and each is uniquely decorated, using materials sourced locally.

“That’s how small business works, we help each other,” says Laura.

The one-bedroom, one-bathroom units have two wall-mounted televisions, a compact kitchen, walk-in shower with rainfall shower head and a separate bedroom. The windows along the front of the units are huge, allowing plenty of light to spill into the space. The fully equipped kitchen means the units are self-contained, giving guests more flexibility.

Outside, the patio is stamped concrete and runs the length of the containers. Each unit also has a privacy fence, barbecue and hot tub covered by a pergola and each one overlooks the Grand River. The units, suitable for singles or couples because of the size, will rent for $250 per night weekdays, $275 weekends.

With tourist highlights such as the village of Elora, St. Jacobs Farmers’ Market and an extensive trail system all within a few minutes’ drive, the couple is confident the units, which cost about $250,000 to purchase and complete, will bring in year-round income, enough to help defray the costs of the property.

Through all this long and difficult process, the Feenstras say it was their faith that kept them motivated and moving forward, knowing in their hearts that everything would work out in their favour and it did.

Laura remembers all those months of uncertainty, if they did the right thing for their family, if they were in over their heads.

“You go back and forth, thinking you’re being reckless, but you have to trust,” she says.