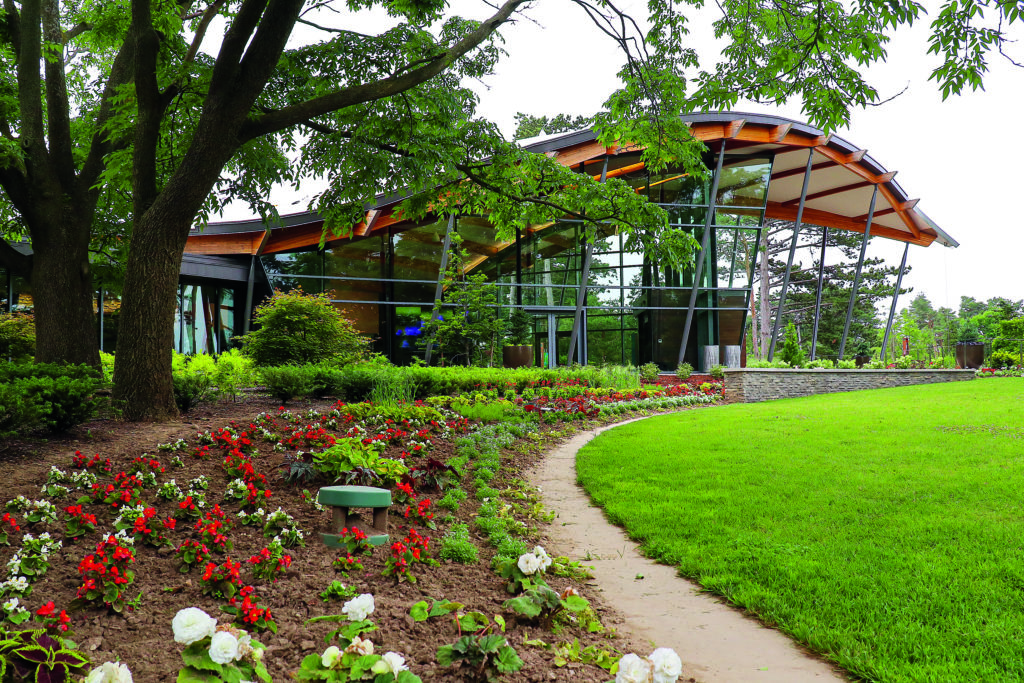 Story and photos by David Hobson

It’s not far, only a half-hour drive away. Maybe you’re a regular visitor – it’s hugely popular, after all. But for many others, it’s one of those back of the mind, been-meaning-to-visit places. And there will be others who’ve never heard of it, but they should.

The Royal Botanical Gardens in Burlington is the largest botanical garden in Canada, a national historical site and a jewel of Ontario that we can enjoy year-round.

There are distinct areas to discover: Hendrie Park on Plains Road is home to the main cultivated gardens. It’s beside the RBG Centre, which holds the Mediterranean Garden. RBG’s only conservatory, it is filled with tropical plants, a toasty warm place to visit even on a winter’s day. Nearby is the Laking Garden, and around the corner along York Boulevard is the newly restored Rock Garden and the Arboretum. Beyond are natural areas with miles of trails that meander along the watery shores of Cootes Paradise, the marshy bay at the western end of Lake Ontario.

The gardens have been around for 100 years and became “Royal” in 1930 when King George V gave the nod of approval. The place is both historic and thoroughly modern, with a timeless quality to the plants and trees in the cultivated gardens and nature sanctuary.

RBG is a place of large numbers, in size and range of plants. That nature sanctuary, for example, covers 1,100 hectares. Here’s another example – in spring 600 varieties of lilacs flood the lilac dell with that lovely familiar fragrance.

Wander through the Arboretum and you might finally identify that tree down your street that everyone argues about. The Anishinaabe Waadiziwin Trail features Indigenous plants, and you can learn more at the Nature Interpretive Centre.

If wild plants are of particular interest, check out the Helen M. Kippax Garden in the Grindstone Creek Valley that adjoins Hendrie Park. Helen Kippax was part of the Stedman family, a household name thanks to the hundreds of familiar, eponymous department stores in communities across the country. One of the founding members of the Canadian Society of Landscape Architects and Town Planners, she was a frequent visitor and sup-porter of the RBG. In the 1940s, Helen would often take her nieces Mary, Margaret and Ruth Stedman to visit the gardens, where she passed on her love of horticulture.

These visits resulted in a generous donation to the RBG by Mary Stedman and her late sisters, and in 2008 the Helen M. Kippax Wild Plant Garden opened. Inspiring and educational, this one-acre garden features six native ecosystems filled with 15,000 plants, including 135 species of native trees, shrubs, perennials and grasses. The setting includes a band of richly diverse Carolinian forest characterized by trees and shrubs typically seen in the more southerly Carolinas. The other zones in the garden are Ontario prairie, oak savannah, woodland edge and wetlands, all of which provide lush habitats that attract a range of wildlife.

The gardens not only celebrate the life and legacy of Helen Kippax, but also offer visitors ideas and examples of balanced, low-maintenance ecosystems that can be adapted to their own landscapes.

More landscape ideas await in the adjoining Hendrie Park with its 12 themed garden areas and thousands of individual plants. Renowned is the Centennial Rose Garden, which reopened in 2018 following a complete restoration. After 50 years, despite the best efforts of RBG’s horticulture team, the original hybrid tea and flori-bunda roses were suffering from the same problems many rose growers face – damage from insects and disease. Appearance is everything in such a prestigious location, so the decision was made – they had to go. 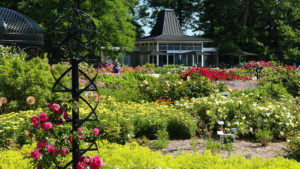 The complete rose garden was replaced, including the soil. Half a metre was excavated and trucked away, and with it the residue of years of pesticides and fungicides use. After the soil was replaced and a trickle irrigation system installed, pathways were upgraded and made fully accessible. Gazebos, obelisks and a reflecting pool went in, and an array of new informative signs installed to tell the story of roses.

Ah, the roses — 3,300 gorgeous, hardy and disease-resistant ones, 300 cultivated varieties in all. To deal with pests, the roses were interplanted with 4,000 companion plants selected to repel pests and attract beneficial insects. This represents a modern, environmentally conscious approach to growing roses.

The RBG also took an ecologically sound approach when the rock garden underwent a $20-million facelift in 2016. This has to be my favourite area, now named the David Braley & Nancy Gordon Rock Garden. Their generosity along with donations from the local community and a $1-million commitment split between the federal and Ontario governments funded a stunning restoration.

Originally an old gravel pit, the rock garden was created in 1929 from 10,000 tonnes of limestone quarried from the Red Hill Valley on the Niagara Escarpment, transforming a place of hard labour into one of natural beauty and relaxation. For decades it was a place to escape from the city and connect with nature, and a playground for kids who loved to clamber up and over the huge rocks that are still in place today.

Originally, 45,000 perennials grew in the garden. About half of these remain, and almost all the trees, fully grown now and towering over the garden. During the renovation, almost as many new plants were added. More than 2,000 species now grow there among the rocks and in the park-like setting below.

Hovering above is the magnificent new visitor centre constructed with arching Douglas fir beams and a glass wall that looks onto the gardens beyond. The centre is a multi-use building that wedding planners love. From there, undulating pathways and steps descend through the massive rocks and into the gardens below. For the physically challenged, alternate routes follow fully accessible pathways with gentle grades, which continue along and through plantings of rare trees and beautiful specimen plants.

Drifts of grasses and flowers line the paths and border the pools that are fed by a waterfall cascading from the rock face. As the seasons change, so do the swaths of colour.

Across the road from the rock garden is the Laking Garden. Long ago this area, bigger than a pair of football fields, was a market garden, supplying produce to the neighbouring cities. Today, it holds the RBG’s collection of almost 40,000 perennial plants. Here, you can walk among a small forest of steel “trees,” sculptures that provide support for unique varieties of clematis selected from the thousands of hybrids. They climb and twine and when in bloom the trees become jaw-dropping columns of colour.

Across the way are the iris and peony collections. When viewed in June and July from the belvedere at the head of the garden, the serried plantings become a multicolored carpet. Up close, it’s like walking among row after row of bouquets, every flower a gorgeous hue. Other flowerbeds brim with a couple of thousand varieties of other perennials.

At the Laking Garden you can discover plants that could feature in your own garden and see them growing at their best, which is just one of the many roles of a botanical garden.

The RBG connects people with plants and nature, it introduces them to the beauty and diversity, and helps preserve species and habitats that are vanishing.

It also provides courses, workshops, camps and school programs year-round. There’s so much to see and do at the Royal Botanical Gardens.

Maybe this is the year pay a visit and discover all it has to offer. It’s only a short drive away.

For more information on the Royal Botanical Gardens, including admission
fees, hours of operation and any restrictions due to the pandemic, check out:
https://www.rbg.ca.