Nehad Abd Alkader with his paintings in his family’s Kitchener apartment.         Photo by Amanda Cheung

Art, they told him, was demonic. But as a passionate artist the demand was unthinkable so he refused. Then, on a day that would forever etch fear and frustration into his life, he says ISIS came and burnt his studio to the ground. In the flames went 700 of his works. He says the extremists then marched to his parents’ house and destroyed the paintings stored there, too.

His life’s work, his brushes and paints were all gone but not his artist’s soul.

Abd Alkader and his wife, Shahnaz, along with a fellow artist, knew they had to flee, far from the dangers in the city, so they walked to the outer limits where they caught a bus to Lebanon. In Beirut, Abd Alkader resumed his painting and had a few exhibitions but he still needed to work to support his wife and their daughter, Roussel, born in 2013 while in exile.

Their lives were deeply unsettled and Abd Alkader’s health suffered. Then a new opportunity: sponsorship to come to Canada though the Kitchener-based refugee organization, Levant. 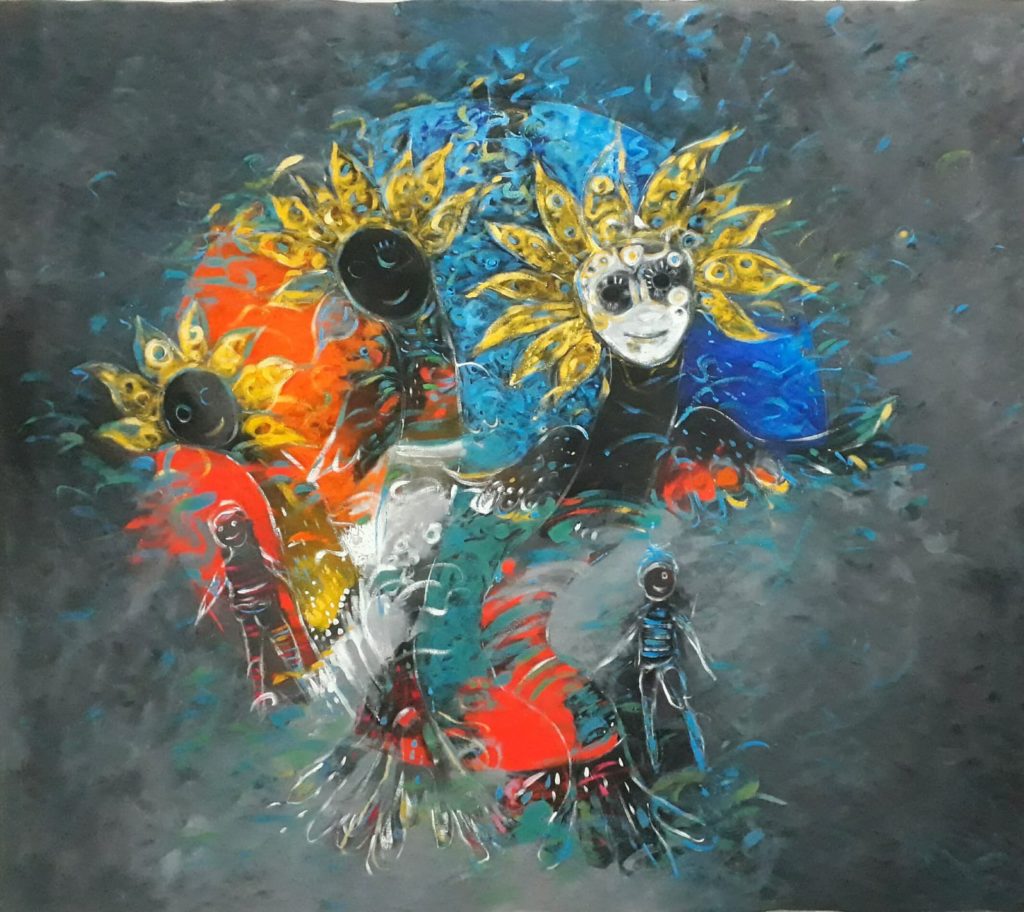 In July 2018, the family was welcomed to Canada by Siba Al-Kadour, Levant’s executive director. Al-Kadour left Syria in 2004 because she could no longer keep silent over what was happening in her country and she wanted a better life for her family.

Speaking through Al-Kadour, Abd Alkader recounted his story from the family’s Kitchener apartment, which is spotless except for all the paints and paintings dominating the dining room.

In just over a year, he has created many canvases. Some are simple portraits. Larger works are beautiful abstracts, filled with stunning images that can be seen only by looking carefully. 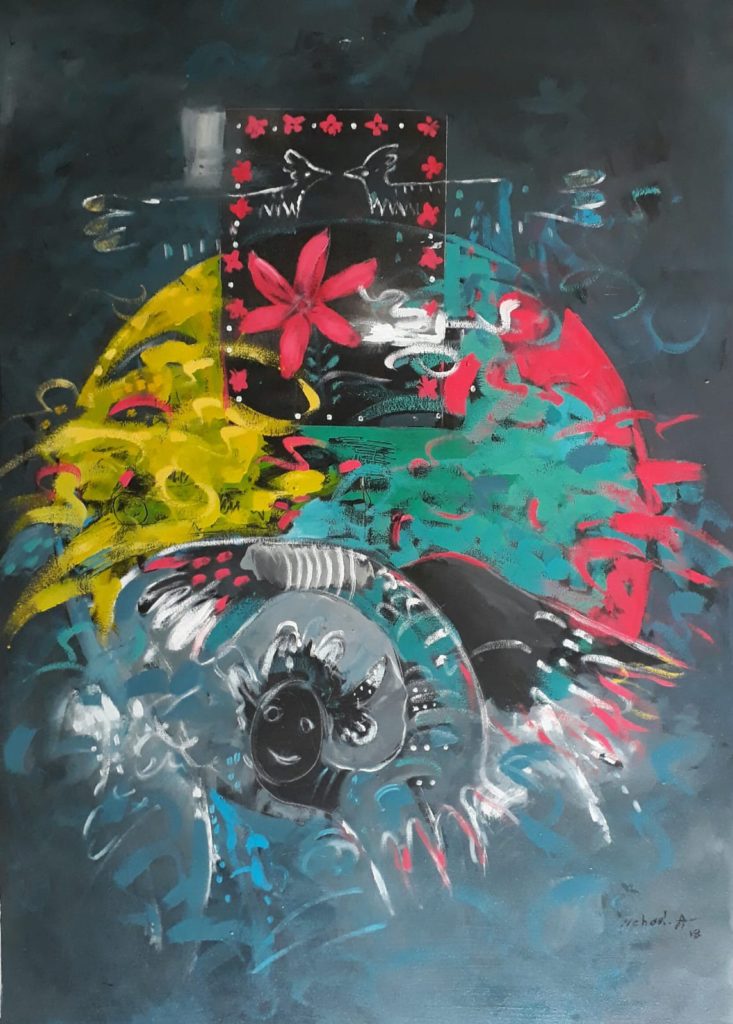 In some canvases there are statements about war, images of bomber aircraft, guns, an exploding planet, with wild splashes of colour, all expressing violence and terror.

“My art changed a lot,” since fleeing Syria.

His artistic inspiration, however, originally came from a place of beauty.

“I started to paint memories, of the village,” he said. “I loved the small town when I was a young child.

“I was drawing memories, of the house, the trees. Everything was beautiful.”

By his mid 20s, he began taking a more impressionistic approach.

Abd Alkader credits his wife with inspiring the brilliant colours in his works that had previously been more monochromatic.

He also began drawing from the many rich stories his grandmother told him growing up outside the town of Hasakah. His grandmother’s stories had a lasting impact and many of his paintings are an homage to his grandmother and his cultural heritage.

Abd Alkader was one of eight children, growing up in a small village. His father worked for the hydro company and when he was transferred to the larger city of Raqqa, the family moved. But Abd Alkader stayed with his grandmother. She could not bear to lose the whole family and insisted on keeping her first-born grandson.

He stayed with her until he was old enough to go to post-secondary school, where he studied art. As an adult in Raqqa, Abd Alkader taught art for about seven years, as well as running his own studio. He has had 10 exhibitions, many of them solo.

One art critic said of his work: “Nehad traps his ideas and interacts with them and builds a spiritual relationship with them to build his own worlds.”

Soon after arriving in Kitchener, Al-Kadour took Abd Alkader to an arts supply store and paid for the items he needed so he could resume painting.

Though he was obviously upset about the burning of his studio and his work, Abd Alkader is also pragmatic. He considers himself fortunate to have escaped to Canada with his wife and daughter and that his family in Syria is still safe.

“Compared to others who lost their lives,” he said. 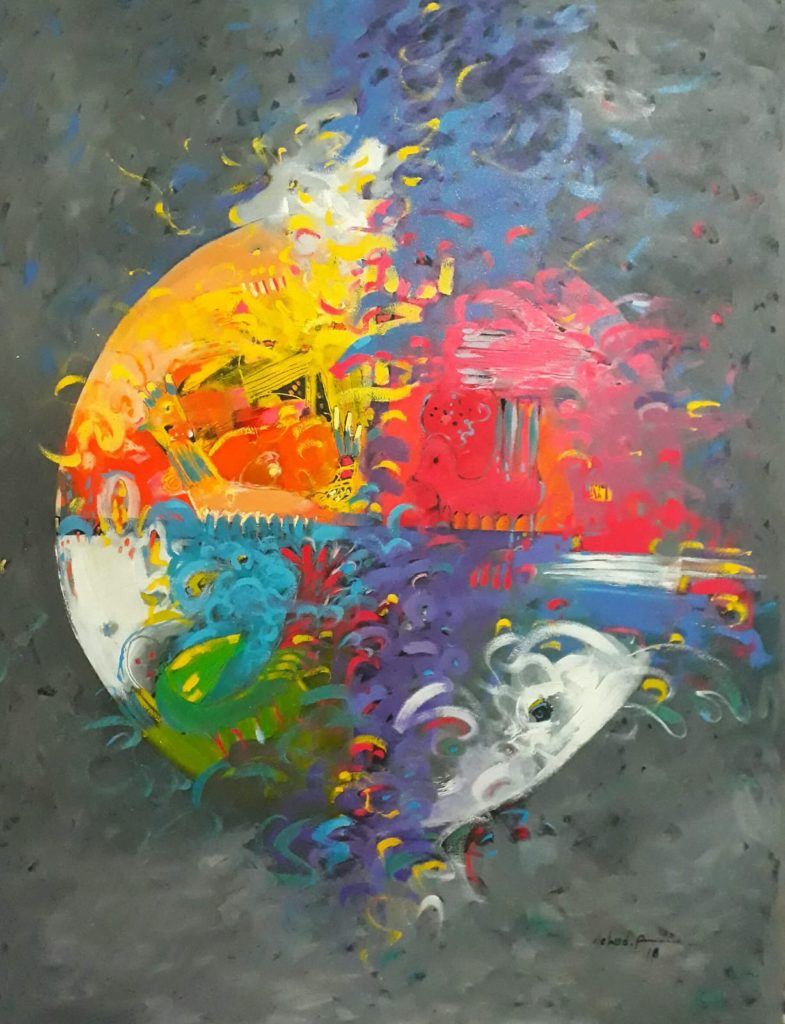 As soon as the Abd Alkader family arrived here, they signed up for English classes and enrolled Roussel in elementary school. She has already mastered English and is expressing herself through impressionistic art, like her father.

Al-Kadour said “he started volunteering right away.” The family has permanent residence status and he’s been working at establishing himself as an artist and, of course, hopes to find a studio so the family can reclaim their dining room.

Working in a small space has limited the size of canvas he can work with. Abd Alkader needs walls, big walls where he can tape up a canvas and let all that is in his heart spill onto the canvas.

Al-Kadour said “he cannot express himself any other way, just through painting.

“He has no limits, he gives all the way.”